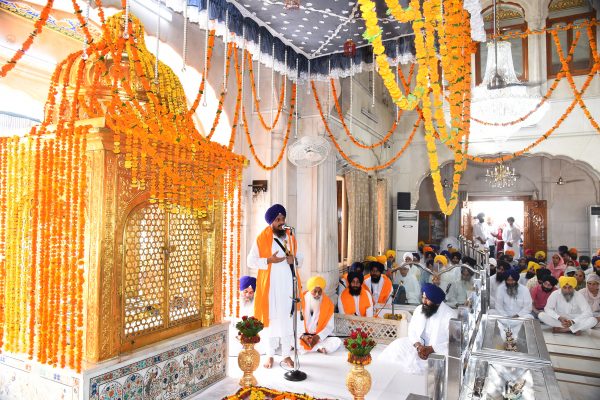 AMRITSAR SAHIB: The foundation day of Sri Akal Takht Sahib, the highest temporal seat of the Sikh community, was celebrated with religious farvour today with its SGPC-appointed acting Jathedar Giani Harpreet Singh having expressed concern over disrespecting the Takht Sahib.

He urged the entire Sikh community to uphold Sikh principles, traditions and customs and be careful of those people who deliberately run campaigns against the Sikh institutions.

Jathedar said that the voice of truth has always been elevated from the true Takht Sri Akal Takht Sahib established by Sri Guru Hargobind Sahib, the sixth Guru (master) and this supreme shrine has always guided the Sikh community as a lighthouse.

“This is why Sri Akal Takht Sahib has been targeted by governments from time to time, but even in times of difficulty, it has shone brighter and the Qaum (community) has elevated more. Today the onslaught against these great institutions of the Qaum has taken on a new form, under which the opposition forces are trying to undermine the institutions by presenting every little thing in a negative light”, said Giani Harpreet Singh.

The Akal Takht Jathedar said, “The entire Sikh community should keep a sense of devotion to its great institutions and beware of those who run the anti-propaganda. The Sikh sangat should come forward and respond to negative propaganda to highlight the great traditions and work of Sikh organizations on social media”.

The Jathedar termed the function being organized by the SGPC to commemorate the first attack on the Golden Temple on July 4, 1955 by the Government of India as a good step to create awareness among the Sikh youth about the atrocities committed against the community and appealed the Sangat to attend the event.

The SGPC president Jagir Kaur congratulated the entire Sikh community and urged them to lead their religious, social and political life under their own traditions.

Kaur said, Guru Hargobind Sahib Ji, the sixth Guru, after the martyrdom of Guru Arjan Dev, the fifth Guru, had established Sri Akal Takht Sahib to unite the community and presented the nature of devotion and power.

She said that while practicing Sikh faith, every Sikh should be dedicated to the source of Panthik power, Sri Akal Takht Sahib, the path of which has been shown to us by the Guru (6th) during his lifetime.