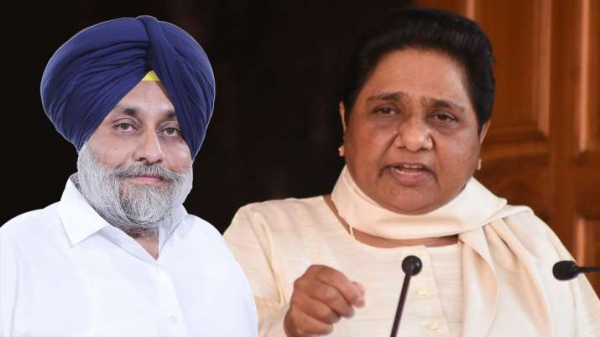 Months after parting ways with Hindu extremist political party Bharatiya Janata Party (BJP) over three farm laws enacted by its government in Centre, Badals-led Shiromani Akali Dal (SAD) is all set to be in alliance with Bahujan Samaj Party (BSP).

Leaders of both parties were in talks to form an understanding on the political alliance. As per media reports, BSP’s senior leader Satish Mishra met SAD leader Naresh Gujral in New Delhi today. Both have agreed to join hands and the SAD president Sukhbir Badal along with state leadership of the BSP may make a formal announcement of the same tomorrow, Sikh24 has learned from sources.

As per the reports, the BSP which has considerable sway in the Dalit stronghold Doaba region of Punjab may contest 18 to 20 seats in alliance with the SAD.

The Sikh circles have welcomed this move but termed it as the step taken very late.

The political commentators say both the parties may join the hands to counter the Dalit card being played by the saffron party in Punjab and its move of declaring that the state will have a Dalit Chief Minister.

Founded by the late Babu Kanshi Ram who was a follower of Guru Granth Sahib and spread Guru Sahib’s ideology among the Dalit community, the BSP is considered close to the ideology of the SAD which also claims itself to be representatives of the Sikh community.

BSP’s alliance with the Akali Dal is not new.

Before being in ties with BJP in the 1997 assembly elections, both the parties contested the 1996 Parliamentary polls jointly and the BSP won all its three seats. The then Shiromani Gurdwara Parbandhak Committee (SGPC) president late Gurcharan Singh Tohra wanted to continue the alliance of the SAD with the BSP, but Parkash Badal snapped the ties after the elections. Badal made an excuse that Kanshi Ram had formed an alliance with Congress in Uttar Pradesh (UP), which is “anti-Sikh”.

Prior to this, the BSP had an alliance with Akali Dal (Mann) in the 1989 parliamentary elections. This alliance got a landslide victory in Punjab. The BSP also supported Tohra-led Sarab Hind Shiromani Akali Dal, when Tohra parted ways with Badal.

Ever since the SAD has been in alliance with the BJP, it is drawing the ire of the Sikh circles which cited that both the parties have no match. They have been demanding the alliance between the SAD and BSP which represents backward classes and scheduled castes. Besides, the BSP has a large number of Sikhs in its rank and file.