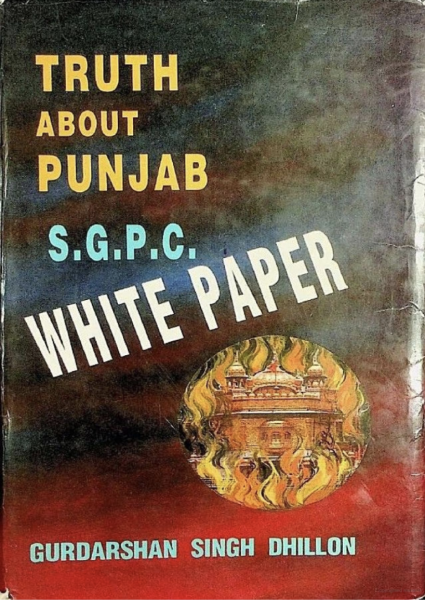 The Shiromani Gurdwara Parbandhak Committee (SGPC) will reprint White Paper on June 1984 Ghallughara (holocaust) carried out by the Indian army.

Parallel to the white paper issued by the Government of India, which was based entirely on lies, the SGPC had also released its own white paper authored by Sikh professor and historian Dr Gurdarshan Singh Dhillon. However, owing to the apathy of the apex gurdwara body, it has been remained out of print for a long time. One of the last copies is available in the Sikh Reference Library managed by the SGPC.

While addressing a press conference, Jagir Kaur said, “I have started reading the white paper and also ordered literature of Dharam Parchar Committee to reprint it as soon as possible so that it could be distributed to Sangat for awareness”.

The SGPC never paid heed before to circulate this vital document amongst Sangat.

While offering tributes to the martyrs, she thanked the devotees and representatives of different Sikh organisations who attended the ceremony on the day and urged the community to be supportive in the works in the direction of Sikh history and heritage.

“The work of gallery being constructed in the memory of martyrs of June 1984 will be completed very soon, and efforts will be made to make public the relics and evidence related to the holocaust. Moreover, on the demand of the devotees, the injured holy saroop of Sri Guru Granth Sahib would be made public from time to time”, she said.

She also announced to provide free education to children who have lost their parents due to the COVID-19 pandemic. “During this pandemic, many people have lost their lives who had limited sources of income. SGPC will make arrangements for providing education to the children of such families so that they can become self-reliant in their future”, said Jagir Kaur.

The SGPC president said, “Similarly, the SGPC will also provide free education to the children of farmers who have lost lives during the ongoing farmers’ protest. Earlier, the SGPC has provided aid of Rs 1 lakh each to the surviving family members of more than 160 farmers.”

Speaking about the rebellious soldiers who left barracks during June 1984 in protest against the army attack, she said that the SGPC had provided aid to these “Dharmi Faujis”. If any soldier is left without the aid, then they should contact the SGPC.