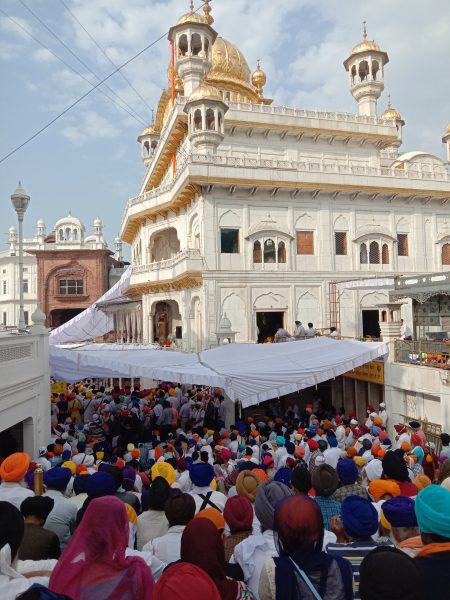 During the 1984 remembrance program at Sri Akal Takht Sahib, the SGPC-appointed acting Jathedar of Akal Takht Sahib Giani Harpreet Singh justified the pro-Khalistan slogans raised by the Sikh youths during Shaheedi Samagam held at Takht Sahib to remember martyrs of 1984 Ghallughara. He said, “Sikhs raise Khalistan-Zindabad to share their pain caused by the army attack on the holiest Sikh shrine”.

While delivering his sandesh (message) from Takht Sahib on remembrance day of June 1984 attack on Darbar Sahib, he said, “The army attack on our holiest shrine is a deep wound on Sikhs, and it gives us pain for the whole year. On its anniversary, we reduce this pain by raising ‘Khalistan-Zindabad’ slogans. We can never forget what happened on these days.”

His point regarding slogans was also endorsed by Jagir Kaur, president of SGPC, during a press conference.

“Sitting together under the patronage of Akal Takht Sahib by burying all kinds of differences and discriminations is the need of the hour. Either it is the SGPC, Delhi Sikh Gurdwara Management Committee (DSGMC) or other Sikh organization, these all are our strength. And we must not lose this strength. Our political rivalries are separate things, these should be, but these organizations must not be weakened on the pretext of these rivalries”, said Takht Sahib Jathedar.

Giani Harpreet Singh said, “We are lucky that we are strong in one aspect. A temple replaced a mosque. There are many Islamic countries, but none raised their voice against this act. Article 370 that gave autonomous status to Muslim-dominated Jammu and Kashmir state was abrogated. None raised a voice against it. However, even in the US, Australia, UK and other countries, the Sikhs raised their voice against the thrashing of a community member in Uttar Pradesh. This is proof of us being alive as a community. Whenever any Sikh faces atrocities anywhere in the world, our community stays united against it.”

He said, “Several emails were received to announce June 1984 as Amritsar Genocide, but this has already been accepted as Sikh Ghallughara (Holocaust) as the genocidal attacks were done at 37 other places as well. During this attack in June 1984, the Sikhs had given a befitting reply to the attacking Army. Therefore, the Sikh community and media should refrain from calling this Ghallughara ” Operation Blue Star”, said Giani Harpreet Singh.

While offering tributes to the martyrs, the head granthi Giani Jagtar Singh said, “In June 1984, the Congress government of India had attacked the innocent pilgrims with tanks, and this attack will be remembered forever. At that time, apart from Sri Akal Takht Sahib and Sri Harmandar Sahib, the attack was also launched at 37 other gurdwaras.”

On this occasion, the son of Sant Jarnail Singh Bhindranwale, Bhai Ishar Singh; daughter of martyr Bhai Amrik Singh, Bibi Satwant Kaur and his brother Bhai Manjit Singh Bhurakohna; son of Bhai Nachhatar Singh Bhalwan, Bhai Bhupinder Singh Bhalwan and family members of many others along with prominent personalities were honoured with Siropao (robe of honour) by the Sikh leaders.

Even as a lockdown was imposed in Amritsar Sahib in the wake of Covid-19, devotees in huge number attended the Shaheedi Samagam to pay tribute to the martyrs. The pro-freedom slogans were echoed at Akal Takht Sahib for an hour.

Film artist Deep Sidhu remained the centre of attraction of the youth on occasion.