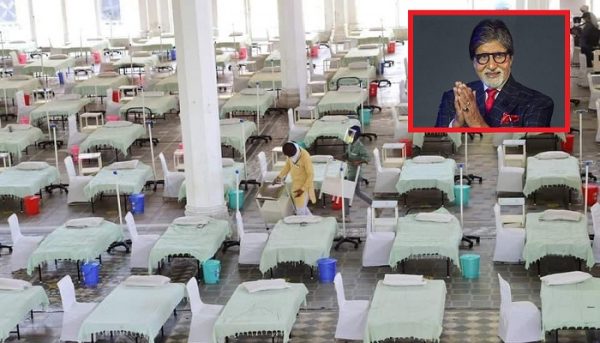 Notably, the Delhi Sikh Gurdwara Management Committee is going to start the 250 bedded Covid Care Facility at Bhai Lakhi Shah Wanjara Hall under the name of ninth Sikh master Sri Guru Teg Bahadur Ji. This facility is likely to get operational within a day or two after the Delhi government’s nod.

Sharing the information about Amitabh Bachchan’s financial contribution over social media, DSGMC president Manjinder Singh Sirsa has claimed that Amitabh Bachchan has hailed the Sikhs by using words like “Sikhs are legendary” and “Salute to the service of Sikhs”.

“While Delhi was grappling with Oxygen, Amitabh Ji called me almost daily to enquire about the progress of our Covid Care Facility. He would often say; आप पैसों की चिंता मत कीजिए… बस ये कोशिश जारी रखिये कि हम ज़्यादा से ज़्यादा जानें बचा पाएँ! He has not only contributed a huge amount but also taken the pain to ensure that oxygen concentrators get shipped from abroad and reach us on time,” wrote Sirsa.

Truth of Amitabh Bacchan 1984.mp4
Watch this video on YouTube.

In October-2014, Amitabh Bachchan was even summoned by the federal court of Los Angeles for instigating violence against the Sikh Community in 1984.

The petition against Bachchan was filed by Sikhs for Justice’s legal advisor Gurpatwant Singh Pannun.  According to the petition, Bachchan had instigated the attacks on Sikhs in November-1984. He had allegedly raised slogans saying, “Khoon ka Badla Khoon se lenge” (“Blood for Blood”) after former Prime Minister Indira Gandhi was assassinated.

In June-2015, Amitabh Bachchan had also helped Jagdish Tytler by telling the Court that he was present at Teenmurti during the Sikh genocide but he was not sure that Jagdish Tytler was also present there on that day. After this, Tytler was given a clean chit by the CBI in this case related to the 1984 Sikh genocide.

At present, a majority of Gurdwaras in Delhi are providing free oxygen to the Covid-19 victims due to which the Sikhs are receiving a huge appreciation.