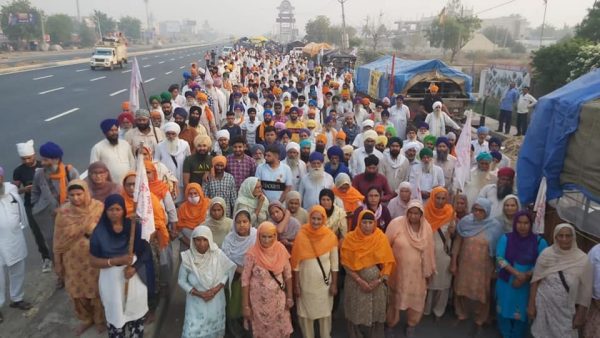 A Jatha of over one thousand farmers and labourers, including women and children from Punjab today, reached the stage of the Kisan Mazdoor Sangarsh Committee at Delhi’s Singhu-Kundli Border. Masses have continued to march towards Delhi borders to express their opposition against the anti-farm bills passed by the Modi Government.
The massive Jatha that arrived here today came from various villages of Sri Amritsar on the call of the Kisan Mazdoor Sangarsh Committee. Since February, a large number of protestors have continued to arrive at the protest sites on the call of the KMSC. Women, in particular, have come in large numbers.
This was the twelfth Jatha to have arrived here today from Sri Amritsar. On May 20, another Jatha of 1,000 protestors will arrive from Tarn Taran. Meanwhile, the 11th Jatha that had arrived from Gurdaspur and Hoshiarpur today returned home.
We Can Survive Covid, But Not The Farm Laws
To welcome the jatha, a press conference was held by the Kisan Mazdoor Sangarsh Committee, in which Sarvan Singh Pandher and Sawinder Singh Chautala addressed the media. “Under the guise of rising COVID-19 cases, the central and Punjab governments are planning to end the farmer’s protest by solidifying the lockdown on the people. However, the enthusiasm of women and mothers from Amritsar has failed all the proposals of the Modi government. The Modi government is using COVID as an excuse to fail the farmer’s protest, but people not allow Modi to proceed with his will motives,” KMSC representatives said.
Sarvan Singh Pandher condemned the statement by the Punjab Chief Minister Capt. Amarinder Singh by stating that he was speaking the same language as India PM Modi. “By making the statements that women and children should not partake in the protests, Captain Amarinder Singh has directly echoed the words of the Modi government,” he said.
“Delhi morcha’s is continuously increasing as farmers in Bengal have given a verdict against the Modi government by voting in favour of the farmer’s movement. Suppose the Modi government does not pay attention to the real demands of kisans and mazdoors in the coming days. In that case, the Bharatiya Janata Party should be ready to receive a similar verdict in Uttar Pradesh and Bihar as well,” he added.