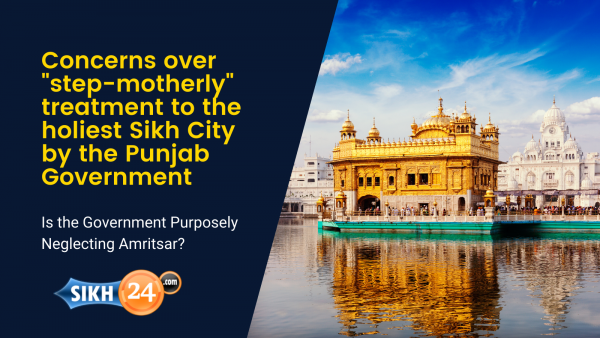 Once considered as one of the largest cities of Asia and founded by fourth Sikh Master Guru Ram Das Jee, holy city Amritsar Sahib is in a state of neglect for decades, and its condition is deteriorating day by day owing to the apathy of the Centre and State government.

Amritsar Vikas Manch (AVM), a non-government organization (NGO), has expressed deep concern over the step-motherly treatment meted out to the home of supreme Sikh shrine Sri Harmandar Sahib (Golden Temple) and second-largest city, in the allocation of development projects announced by the Punjab Government in the last 4-5 years.

“On one hand, the Punjab government did not release 40 crores for the Patti-Makhu rail line. It has also failed to acquire 35-40 acre land on Amritsar-Attari road for the construction of the campus of Post Graduate Institute of Horticulture Research and Education which was announced five years back in 2015 by the central government”, said Principal (retd) Kulwant Singh Ankhi, Patron of the AVM, while addressing a press conference here.

Brar said, “Most of the textile industry of Amritsar closed after 1980 and shifted to Panipat, Ludhiana, etc., but the Punjab government made no efforts to revive the textile industry in Amritsar. On the other hand, Punjab government has announced to set up Industrial Park with special emphasis on textile at Mattewara near Ludhiana on 1000 acres and Rajpura on 2000 acres, a mega industrial township of green Industries (drug pharma park) is coming up on 1300 acre land in Bhatinda with an investment of 1800 crore, a medical devices park in an area of 210 acres proposed at Rajpura, and another Pharma park is coming up on 130 acres at Fatehgarh Sahib”.

“The Punjab Government has asked the Greater Mohali Area Development Authority (GMADA) to start the process of providing 200 acres land for the Electronics, System, Design, and Manufacturing (ESDM) cluster in Mohali. Punjab government is acquiring around 3 to 4 thousand acres land All over Punjab and especially Mohali, but not even a single acre is acquired at Amritsar for the last 5 years”, he said.

He further said, “While Guru Nanak Dev University Amritsar remained the best sports university in India for 22 consecutive years continuously and Sixth Guru Sri Guru Hargobind Sahib started games Amritsar for the first time. The Punjab government has recently proposed an international level sports complex by a USA-based firm at Mohali. Mohali is being developed as a destination for IT, real estate, Institutional, Electronics, and other Industrial sectors. But no such plans for Amritsar, which is the second-largest city of Punjab with religious, historical, national, and international tourist importance”.

Guatemala said, “Lahore, which is also on the border, is the capital of Pakistani Punjab and is one of the world’s biggest cities with more than one crore population. But the negative, biased and indifferent approach of the successive Punjab governments blocked the development of Amritsar city at par with Lahore. But even then, with the blessings of Sri Guru Ram Das Jee, Amritsar city and its airport thrive as the biggest destination in India”.

p style=”font-weight: 400;”>”Central government had also sanctioned Special Economic Zone (SEZ) in Amritsar in 2004, and an MOU was signed between Punjab government and DLF. But due to the indifferent, biased, and anti-Amritsar attitude of the Punjab government, the SEZ project could not see the light of the day. In Mohali and other districts, the Punjab government has acquired thousands of acres and still is acquiring land for megaprojects, but for Guru ki Nagri Amritsar, it has no interest”, he added.