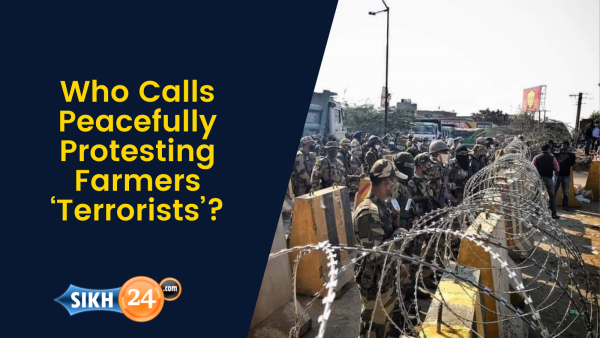 I have been called a terrorist many times.

Because of my turban and beard, ignorance, prejudices and fears have driven strangers from California and New York to call me a terrorist.

Across the globe in India the land my parents hail from, farmers protesting three laws passed by the Indian parliament in September 2020 are also being labeled as terrorists. Not just by strangers but the leaders of India’s ruling Bharatiya Janata Party (BJP). Many of these farmers look like my parents, my grandparents who came from farming backgrounds and like me. Being labeled as a terrorist for standing out and standing up for your rights is deeply personal to me.

A legislator from India’s ruling party made the claim, “Terrorists are sitting there and the terrorists have AK-47s with them.” without an iota of evidence. A leading Bollywood actress turned activist Kangana Ranaut recently claimed “protestors were not farmers but terrorists who are trying to divide India.” These terror tropes are spurring mainstream media outlets into a broadcast frenzy.

India, the most populous democracy in the world is confronting largely peaceful protests from farmers with time tested tools of dictators and autocrats. Anyone who takes a critical stance against government policies is being labeled as anti-national and unpatriotic.

The most recent victim of this strategy is 22 year old environmental activist, Disha Ravi who was arrested by Indian police for sharing a toolkit document first made public by Swedish activist Greta Thunberg in a tweet expressing support for farmers.

The toolkit gives introductory primer to the ongoing farmers’ protests. It offers action items including social media strategies, making calls to elected representatives and peaceful protests at government sites. There is no call for violence in the toolkit.

Delhi police alleges the intention of the creators of the toolkit was to create disharmony among various social, religious and cultural groups and encourage disaffection and ill-will against the Government of India. The creation and foreign origins of this toolkit is being used as a bogeyman. Disha Ravi is being charged with sedition.

Journalists and labor rights activists have been arrested, internet access in protest sites has been cut, the government is strong-arming twitter into blocking activist accounts. Supporting the farmers movement is now an act of treason.

A movement that started last September with thousands of small scale farmers across India protesting the new agriculture laws. The laws were rushed under extraordinary circumstances in the midst of Covid-19 pandemic with minimal input from farmers and opposition parties. Farmers contend allowing private companies to buy produce directly from farmers, moving away from decades-old infrastructure of state-sanctioned wholesale markets that guaranteed a minimum support price will destroy their livelihood. Government claims it is modernizing how India does agriculture.

In the absence of the two parties sitting in the same room to pen these laws, the conversation about these laws has spilled into a global public relations exercise. India’s ruling party aided by media outlets, celebrities and social media bots are making the case against farmers.

The actor-turned-politician, Hema Malini a member of parliament laid out BJP’s argument, “They (agitating farmers) do not even know what they want and what is the problem with the farm laws, which shows that they are doing this because someone asked them to do it.” Many BJP supporters have focused on the fact that most farmers are uneducated.

Some of the farmers’ leaders hail from northwestern state of Punjab, known as the bread basket of India for its outsize agricultural output. These farmers don the quintessential Sikh turban and beard. BJP leaders have been attempting to frame these farmers as anti-nationals or ‘Khalistanis’, those supporting a separate state of Sikhs. The toolkit that has taken center stage in this drama is being linked to ‘Khalistanis’ in the US, UK and Canada. Ram Madhav, a former National General Secretary of the BJP posed this question to his million followers, Is Khalistan the reason for farmers’ march to Delhi?

Many things in India are being framed under the lens of Hindu majority versus minority groups. Farmers movement is no exception to this. Farmers in this movement come from many backgrounds. They do not represent a specific religion, ethnic group or political party.

Farmers have a deep intelligence of processes that are integral to our survival as a species. Farmers feed the entire planet everyday. In the middle of a global pandemic, farmers are the most essential of essential workers.

Maligning a peaceful grassroots movement by intentionally creating a narrative of terrorism around it might be a victory for the BJP and its extreme right wing partners but not for India’s democracy. Farmers are one of the greatest assets in creating a more peaceful and prosperous India. Every freedom loving citizen needs to stand with their calls for equity and justice.