NEW DELHI, India—After enduring harsh winter nights under the open sky, agitating farmers are now leading towards the unbearable summer days. In May month, the temperature often rises to around 48°C in Delhi along with heatwaves. 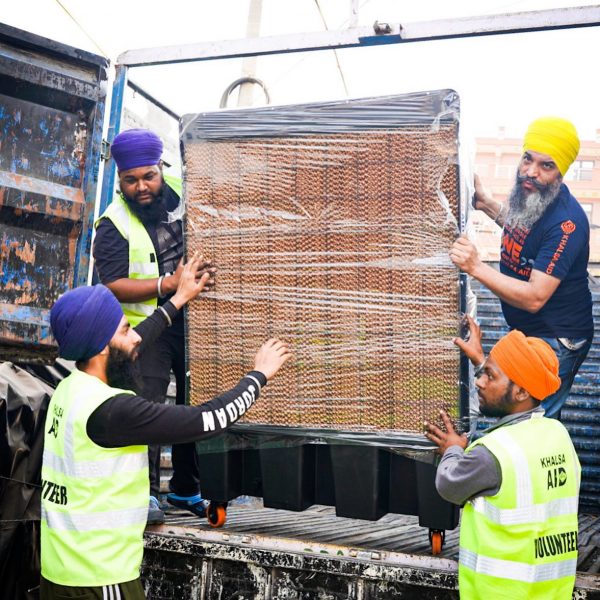 Anticipating the difficulties of agitating farmers due to upcoming harsh weather conditions, Sikh bodies working in support of farmers’ agitating have started making arrangements for comforting the stay of protesting farmers at Delhi borders.

The Khalsa Aid has started installing the air coolers in shelter homes built by it at Delhi borders to stay comfortably at Delhi borders while protesting against the BJP led Indian government seeking to repeal of recently imposed three farm laws.

Besides this, Khalsa Aid has also started providing mosquito nets and mosquito repellents to the protesting farmers to keep the mosquitoes away from them.

The water distribution drives have also been increased to farmers’ camps at Delhi borders to keep them hydrated.

Similarly, the apex Sikh body Shiromani Gurdwara Parbandhak Committee has also announced to extend a helping hand for the protesting farmer by providing them tin sheds and fans so that they could continue their struggle at Delhi borders despite rising temperatures.

p style=”text-align: justify;”>”The SGPC will provide the facility of tin sheds to the farmers sitting on protests at Delhi borders. The SGPC would also provide fans in these sheds to protect them from heat. At the same time, the services of langars, medical aid, and toilets, etc., would continue as earlier during the farmers’ agitation,” said SGPC president Bibi Jagir Kaur.