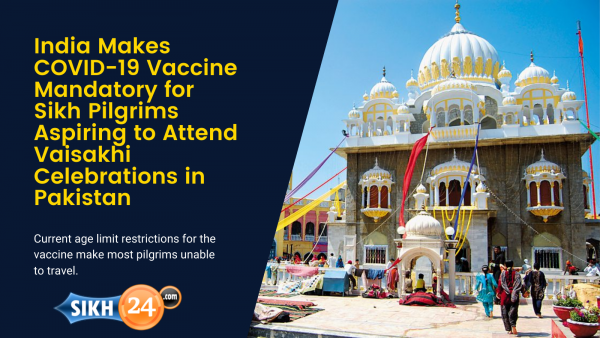 The Government of India has made the COVID-19 vaccination mandatory for the Sikh pilgrims before going to Pakistan to celebrate the foundation day of Khalsa Panth or Vaisakhi festival at Gurdwara Panja Sahib in Hasan Abdal.

Disclosing this, the Shiromani Gurdwara Parbandhak Committee (SGPC) president Jagir ‘Kaur’ said some officers of an Indian intelligence agency called Intelligence Bureau (IB) had met her telling her that the SGPC could send the jatha of the pilgrims but applied the condition of COVID-19 vaccination for them. However, the officers did not give her anything written. So, there is no clarity about the pilgrims who don’t fulfill the government’s age-related condition to get vaccinated. Currently, only those above the age of 60 can get vaccinated.

The jatha is scheduled to leave for Pakistan on April 10. Still, uncertainty will prevail over the pilgrimage until the SGPC, which sends the largest group of pilgrims, does not get any formal letter from the Government of India. Before this, the government denied the Sikh jatha permission to go to Pakistan to take part in Saka Nankana Sahib’s centenary functions at the eleventh hour, disappointing the pilgrims.

Jagir ‘Kaur’ disclosed the upcoming pilgrimage developments during a press conference organized after the SGPC executive committee meeting held here. As per the decision taken during this meeting, the gurdwara body’s budget session will be held on March 30. In this meeting, Gurdwaras’ budget, including SGPC’s Dharam Prachar Committee, trust funds, press, general board fund, Sikh Itihas Research Board, and educational institutions, will be presented.

SGPC president said that in response to the letter written by the SGPC to the Government of India, the government had sought the opinion of the SGPC regarding the issuance of commemorative coins, postage stamps, and letter envelopes on the occasion of the 400-year birth centenary, which would be decided by the sub-committee formed for the same.

SGPC president said the executive committee has also taken an important decision for the cleanliness and greenery in the environment under which many saplings dedicated to the 400th birth anniversary of Guru Tegh Bahadur Sahib would be planted.

She said that various ceremonies would be held to celebrate this historic day on a grand scale at the same time.

“Nagar Kirtan would be started on March 15 from Gurdwara Guru Ke Mahal, Sri Amritsar, the birthplace of ninth Guru dedicated to his 400th birth anniversary, which would be completed in Delhi. The main function will be held on May 1 at Amritsar, which will be attended by prominent personalities of the country and representatives of the Panth.” She informed that various events related to the centenary had been started.

Responding to another query, Jagir ‘Kaur’ said, “The Government of India should not hurt the sentiments of Sikhs by not reopening the Kartarpur Sahib corridor.”