LONDON, UK—Basics of Sikhi, an organization started by the late Bhai Jagraj Singh UK, today shared that its Youtube account was hacked. Bhai Jagraj Singh was one of the early Sikh influencers on YouTube. He used social media to propagate Sikhi ideology to the masses through his prachar in English and easy to understand Punjabi.

At the time of this post, Basics of Sikhi links show up on Google. However, they do not open.

Archive.org records show that in November 2020, Basics of Sikhi had 159,000 followers, with some of Bhai Jagraj Singh’s videos having more than a million views.

On Twitter, Basics of Sikhi posted the following message –

Dear @YouTube our spirituality page ‘Basics of Sikhi’ has been hacked and suspended. Please return it to the people. @everythings_13 helps millions of people everyday meditate and feel at peace. Help us now #YouTubeReturnBasicsofSikhi

Several prominent Sikhi and Punjab YouTuber accounts have been hacked over the past year. SikhismTV (110k subscribers) and TheKhalsaTV (500k subscribers) had been hacked but were recovered and returned after intervention by Youtube Support.

Many Sikh organizations have used the hashtag #YouTubeReturnBasicsofSikhi to seek the attention of Youtube Support. 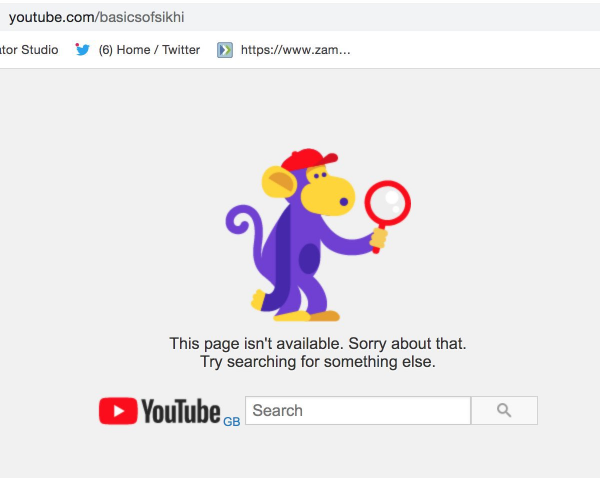 Sikh advocacy organizations such as SALDEF, United Sikh Mission, and Sikh Coalition have taken up the issue with Facebook and other social media platforms to get Sikh hashtags reinstated. However, some believe that a permanent solution to stop censorship of Sikh activism on social media platforms is a far-fetched goal due to the Indian Government’s influence.

If you are part of an organization that has been censored by social media platforms, please contact SALDEF.