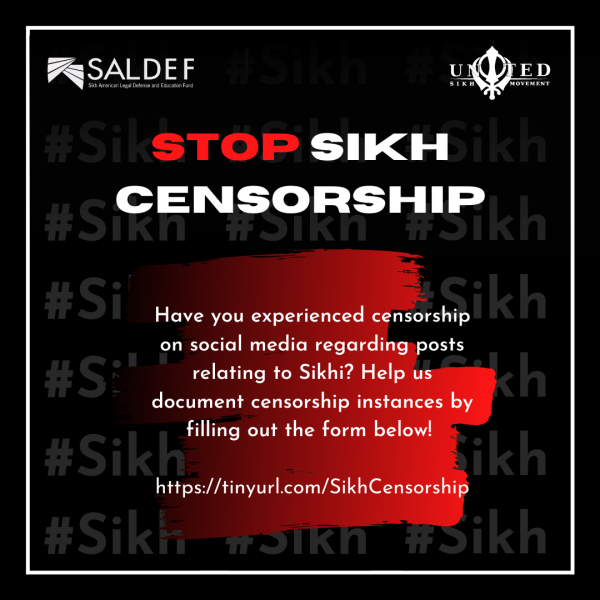 NEW YORK—In June 2015, Sikh24 was amongst the organizations that had their Facebook pages blocked in India. Since then, Facebook has worked with Indian authorities to ban and limit the audience of a number of other Sikh Facebook pages. Sikh24 received no information about the ban on our first page on Facebook until we started receiving emails by our users informing us that they could no longer read our news on Facebook.

In a correspondence received by SALDEF, Facebook acknowledged that they have been silencing the international Sikh community by blocking the use of hashtag #Sikh on Instagram and Facebook platforms. A Facebook representative told SALDEF, “we’re sorry that this hashtag was blocked again, and we’d like to take the opportunity to explain steps we have taken to address the issue.” SALDEF and other stakeholders will be meeting with Facebook to address this issue in the coming weeks.

Facebook has over 2.5 billion users internationally and has become an essential platform for communicating and organizing. Users internationally rely on Facebook to be a neutral platform that allows for free thought and expression. There is no reason that #Sikh should have been blocked. It is unsettling that so quickly a single platform can silence a population of over 27 million people internationally.

In a press note, SALDEF stated that it hopes that Facebook will work in a constructive manner as they did in 2010 when our organizations partnered together to remove over 45 Anti-Sikh pages from Facebook’s platform.

“At this time, there continues to be unresolved issues that require Facebook to provide answers. SALDEF will continue to work with Facebook on these unresolved issues to find out why this happened and what steps they are taking to ensure that this will never happen again to the Sikh community and other communities looking to exercise their free speech,” SALDEF added.

SALDEF has continued to put pressure on Facebook to respond to our questions. If you or someone you know has been censored on social media, please fill out this form. SALDEF, in partnership with United Sikh Movement, is gathering data to understand the scope of this issue. Help us combat censorship.