Earlier today, US-based activist Pieter Friedrich ended his 5 day-long hunger strike. Pieter is a renowned activist who is vocal against the rise of Hindu fascism in India. He went on a hunger strike to ask Twitter CEO Jack Dorsey to take back his donation of $2.5 million made to the Sewa International USA, a nonprofit organization linked to the RSS, which is a violent Hindu nationalist paramilitary in India.

“I have done what I can to shine a light on this issue. Now it is time for me to break my fast. Many, many thousands more are now aware of the true nature of Sewa International and why Jack’s donation to it is so deeply disturbing,” Pieter said in a statement as he broke his fast.

He added, “Fueled by a broken fast, I will continue fighting the fascism of the RSS.”

Sewa International USA is connected to Sewa International in India, which is itself affiliated with Sewa Bharati, which is the social service wing of the Rashtriya Swayamsevak Sangh (RSS), a Hindu nationalist paramilitary that is implicated in countless incidents of violence against minorities, including pogroms.

Pieter said that over the past 20 years, reports have repeatedly exposed how donations made for disaster relief purposes to chapters of Sewa International have been given to organizations in India that are connected to the RSS and possibly even directly linked to RSS-sponsored anti-minority violence. 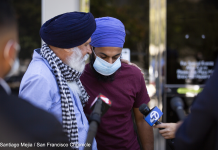 San Jose VTA Shooting: Difficult situation for the Sikh community as family members struggle to trace their loved ones