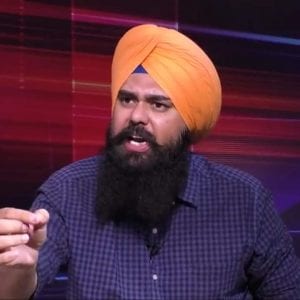 CHANDIGARH, Punjab—n a big jolt to Hindu right-wing political group Bhartiya Janata Party (BJP), its state general secretary and Malwa in charge Malwinder Singh Kang resigned today in protest against anti-farmer laws enacted by its government in the centre and its approach towards the farmers.

Kang sent his formal resignation to the state president Ashwani Sharma, in which he states, “The farmers, arhtiyas, small traders and labour organizations have been democratically and rightly protesting against the new acts passed by the Central government since last many weeks (sic)”.

“As a General Secretary of the state BJP and being a member of the core group of the party, I raised my voice in support of the protesting farmers, arhtiyas, small traders and labour organizations at the party platform. I requested the party’s state and central leadership many times to hear the aforesaid protesting persons and to address their grievances but no positive step was taken in that direction…Therefore while supporting the farmer agitation, I resign from the post of state general secretary, member of the core group of the party and from the primary membership of the party…..Kisan Mazdoor Ekta Zindabad (sic)”, it further reads.

Making disclosures about the saffron party which is facing the wrath of people in Punjab over the farm laws, Kang said, “I was feeling suffocated for the June this year, because neither BJP’s state leadership thinks like Punjabis, nor its central leadership is ready to listen to us”.

“I tried to press the other state leaders in the state core committee meetings to go to Delhi to convince the central leadership to address the concerns of Punjabis, but no leader had courage to open his mouth before the central leadership. On this issue, I also had heated arguments with the Union Minister Hardeep Singh Puri but ultimately I preferred to keep mum in view of his age factor”, he said.

He disclosed that things were not favourable in the BJP. “For instance, when I talked about the issue of farmers in a meeting, I was told by a leader that I am speaking in a tone of Pakistan. After another leader raised an objection over this remark, he had to apologize for it”, he added.

Kang said, “The BJP has no rationale to justify the farm laws. It is just saying that the farmers are being misled by the other parties. Its Punjab leadership is so patriotic toward Prime Minister Narendra Modi that it never thought that Modi could take any wrong decision”.

Kang was one of the very few prominent Sikh faces of the Hindutva party in Punjab.

Prior to this, Advocate RP Singh Maini quitted the party in protest against the laws, scrapping Punjabi as one of the official languages of Jammu and Kashmir and stand of BJP on Satluj-Yamuna Link (SYL) canal issue. More Sikh faces are expected to leave this party in the coming days.