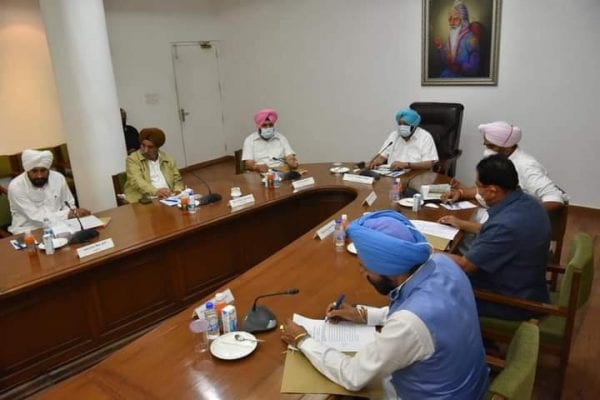 The CM called a meeting of the cabinet and Congress Legislative Party (CLP) at Chandigarh to discuss the matter. However, no decision was taken in the cabinet despite the presence of all its members in the meeting about how to counter the farm laws in the assembly. And the rights were given to the CM. “The CM was authorized by his council of ministers to take any legislative/legal decision he may deem fit to protect the interests of the farmers”, said the spokesperson of the state government.

“This fight will go on, we will fight this till the Supreme Court,” the Chief Minister earlier said at a meeting of the Congress Legislative Party (CLP). Referring to the demand raised by many Kisan Unions some days back for an immediate session of the Assembly, the Chief Minister said this could not be done earlier as all legal implications had to be examined thoroughly before taking any step.

The Chief Minister said the views of the MLAs would be taken into account while finalising the strategy to battle the Farm Laws, in consultation with legal and independent experts, including senior lawyers and AICC leader P Chidambaram. He said the whole world was watching Punjab with a lot of expectation and the views of the MLAs were extremely important for drafting a comprehensive strategy to protect the state’s farmers and agriculture. The fight will continue till the Supreme Court, he said.

Making it clear that the fight, for the Congress, was not about politics but to save Punjab’s agriculture and its farmers, Captain Amarinder said any decision will be taken in the interest of the farming community. Taking a dig at the Akalis, the Chief Minister said the Congress was not double-faced and had a clear stand on the issue of the Farm Laws.

Earlier, the Punjab Congress MLAs were unanimous in their opinion that the Centre’s anti-farmer legislation should be totally rejected and the state should make suitable amendments to provide for strict action, including imprisonment, for those who purchase wheat or paddy at less than the MSP.

Several legislators stressed the need for aggressively countering the false propaganda being spread by opposition parties against the state government and the party on the issue of the Farm Laws. MSP and Mandi system had to be protected at all costs, and the unconstitutional laws, which were against federalism, had to be countered effectively, they said. The message needs to go out clearly and unequivocally, that the Farm Laws are not acceptable to Punjab, they said.

Since farm laws are crucial for farmers in particular and Punjab in general, Cabinet’s move of authorizing the CM creates doubts on his intention about protecting interests of the state. Earlier, his role is questioned in delivering justice to Sikh community in case Bargari sacrilege took place in 2015 as the then Chief Minister Badal and his son Sukhbir Badal who was deputy CM then, are getting scot free despite their role is underlined.

In same style, Badal secured authorization especially in party matters whenever any important decision was to be taken. With this undemocratic practice, the SAD (B) has lost its base in the Sikh masses.