NEW YORK—A number of world leaders and renowned personalities greeted the Sikh Nation on Vaisakhi. Where this message was appreciated by the Sikh community worldwide, a number of internet trolls did not spare any time in promoting their own agenda, claiming that the celebrations hold no importance to the Sikhs.

Canadian Prime Minister became a special target of these pro-India trolls after his Vaisakhi message, which was started with Gurfateh in thaith (fluent) Punjabi. Justin Trudeau started his Vaisakhi message with “Waheguru Ji Ka Khalsa, Waheguru Ji Ki Fateh!” and appreciated the Sikh community’s contributions towards Canada during the difficult times due to COVID-19. He said, “I wish we could be celebrating together at a Nagar Kirtan or a Gurdwara,” in a message shared on Twitter.

Vaisakhi is a time to focus on what matters – family, friends, and being there for our neighbours. And although we can’t come together at a Nagar Kirtan or a Gurdwara this year, I want to wish all Sikh Canadians celebrating a very happy Vaisakhi! https://t.co/mF9PbUdTLq pic.twitter.com/s0i56qGBXB

In response to Trudeau, Vir Sanghvi, an Indian journalist with a following of 4 million asked why so much attention was being given to the Sikh community while there are so many Hindus who also live in Canada and celebrate Vaisakhi.

Another Twitter user posted that Vaisakhi is a festival of harvest and has no historical significance to the Sikh community.

US House of Representative Alexandria Ocasio-Cortez (AOC) posted, “Vaisakhi diyan vadhaiyan! Happy Vaisakhi to everyone celebrating today.” AOC appreciated all the hard work of the Sikh community. “In this trying and uncertain times, it’s more important for all of us to apply the Sikh values of hope, universality and selfless service.”

A number of leaders from the UK political and royal affiliation also wished the Sikh community on Vaisakhi. This included the office of UK Prime Minister Boris Johnson, Jeremy Corbyn, Keir Starmer, Sadiq Khan, Prince Charles, and others.

Swaranjit Singh Khalsa from Connecticut said, “India is jealous of the Sikh Nation getting a massive recognization in various countries on the occasion of Vaisakhi.”

Manpreet Singh UK, an activist and TV anchor, based out of the UK said, “Biased Indian Media has shown its true face one more time by hurting Sikhs Religious Sentiments. Indian Media has always demean Sikh struggle for freedom and now it shows clearly how India is jealous of Sikh Nation Recognition in Diaspora.”

Manpreet Singh shared several tweets from various accounts on Twitter that attempted to downplay the importance of Vaisakhi for Sikhs. 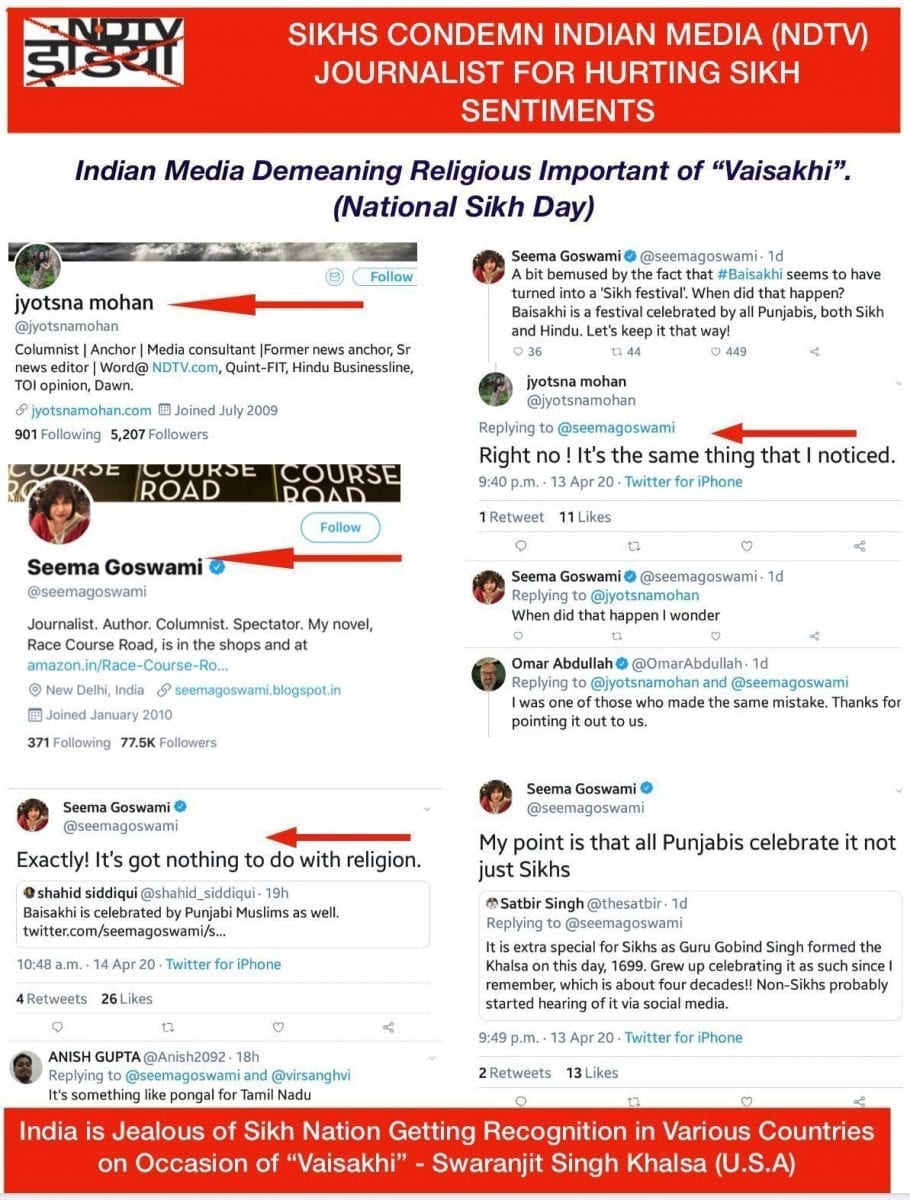 SGPC president Gobind Singh Longowal appreciated the message by the leaders of various countries for praising the Sikh community in their greeting messages on the eve of the Khalsa Sajna Diwas. Longowal said that these messages hold special importance for the Sikhs and we are so few in numbers, but get respect from major leaders across the world.