NANKANA SAHIB, Pakistan—The Ministry of Foreign Affairs in Pakistan has released the route plan for the pilgrims wishing to visit Pakistan Gurdwaras on the occasion of Vaisakhi. As per the issued plan, Sikh pilgrims from West Punjab and India will be granted 10 days visas. Pakistan Government is monitoring the situation around the spread of Coronavirus and will issue updates as necessary.

On April 12, pilgrims will depart for Wagah on foot through Joint Check Post Attari by road and from there they will be taken to Hassan Abdal directly. On April 13, pilgrims will go to pay obeisance at the shrine of Vali Kandhari and on April 14, Bhog of Sri Akhand Path Sahib will culminate at Gurdwara Sri Panja Sahib on the occasion of Vaisakhi.

On April 15, they will depart for Sri Nankana Sahib by bus in the afternoon.

On April 17, Sangat will depart for Lahore by bus. After reaching Lahore, Sangat will go to pay obeisance at Gurdwara Sri Kartarpur Sahib, situated at Narowal.

On April 20, pilgrims will visit Gurdwara Rori Sahib, Gurdwara Chakki Sahib and Khuhi Bhai Lalo situated at Eminabad town of Gujranwala and on April 21, Sangat will be departing to return back to India after staying in Lahore.

Special security arrangements have been made by the Pakistan Government.

It is noteworthy here that the Indian government has already suspended all types of passenger movement through land check posts with its other neighboring countries Pakistan, Nepal, Bhutan, Myanmar and Bangladesh. 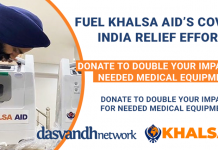