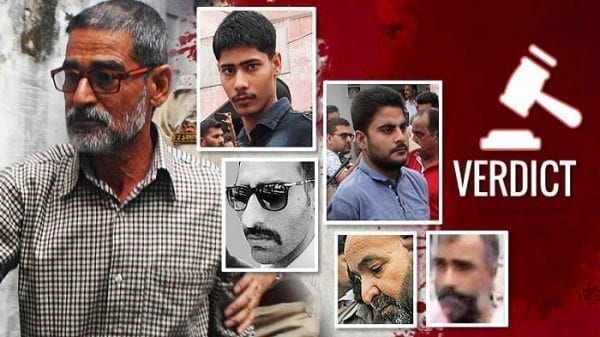 Sanji Ram, the village head and the caretaker of the temple where the minor was gang-raped, Deepak Khajuria and Parvesh Kumar have been sentenced to life imprisonment of 25 years. The other three accused – Tilak Raj, Anand Dutta and Surender Verma were sentenced to five years in jail for destroying crucial evidence in the case.

The special court acquitted Sanji Ram’s son Vishal due to lack of evidence. The eighth accused, a juvenile, will be tried at a juvenile court. His trial is yet to begin as a petition to determine his age is awaiting judgment in the Jammu and Kashmir High Court.

Meanwhile, the Dal Khalsa has expressed dissatisfaction over the Pathankot court’s verdict.

Commenting on the Pathankot court’s judgment on the Kathua rape-murder case, the Dal Khalsa has said the punishment addressed to three prime accused convicted for rape and murder was inadequate. The organization refuses to term the verdict full and final justice to the Asifa- the eight-year-old girl, who was kidnapped, raped and murdered in captivity.

The Punishment for life is not commensurate with the enormity of the crime, said leader of Sikh organization in a statement.

“The convicted persons deserved death sentence or life sentence till death as their act was barbaric and beastly and no less punishment would provide sense of relief to the victim and her family,” said party spokesman Kanwar Pal Singh.

He, however said the verdict was a big slap on the faces of those politicians including the BJP, who by holding Tricolor defended the perpetrators, threatened the lawyers and derided the legal system.