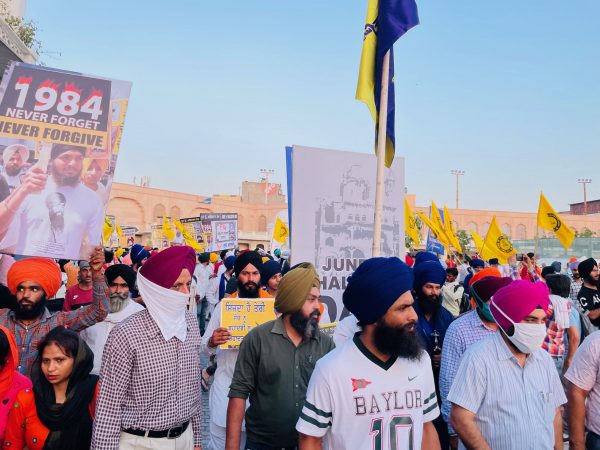 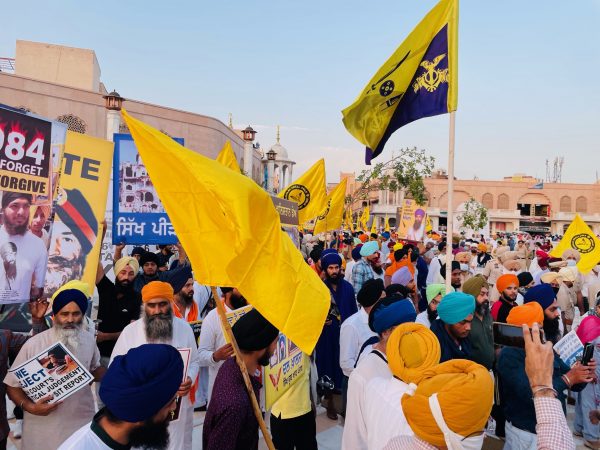 On the call of Dal Khalsa, the Sikh activists took out ‘Genocide Remembrance March’ on the eve of the 37th anniversary of June 1984 Sikh Ghallughara (holocaust) on the street leading to Sri Harmandar Sahib (Golden Temple).

After organizing a function at Bhai Gurdas Hall in memory of martyrs of the Ghallughara, during which the Indian army attacked the holiest Sikh shrine and highest Sikh temporal seat Sri Akal Takht Sahib, activists conducted the parade from the Hall to Sri Harmandar Sahib.

The demonstrators displayed photographs of damaged Akal Takht and Sikhs who attained martyrdom during the military action. They were carrying Kesri flags and placards. On reaching Sri Harmandar Sahib, they performed “Ardas”. Sections of the paraders were loudly raising slogans in favour of Khalistan.

Earlier, organizers of the demonstration appealed to Sikhs worldwide to observe 6 June as Khalistan Day, reiterating that independence and not federal autonomy is the yearning of the Sikh people and a permanent solution to the fettering Punjab problem.

During the function, family members of Martyrs that include Gen Shabeg Singh, Bhai Amrik Singh, and others, were honored by the organizers.

The party head Harpal Singh Cheema said: “Thirty-seven years ago, with the attack on the Golden Temple, the foundation stone for an independent state was laid. The sentiments of sovereignty that were strengthened by the army attack have not been buried with the passage of time and change in the political scenario.”

To drive his point home, he quoted Sant Jarnail Singh Bhindranwale’s speech on 27 March 1983, in which the Sikh national hero said, “The day the police will attack this place (Darbar Sahib), it will become an example for the world. On that day, Khalistan will definitely be a reality”. Sant Bhindranwale’s comments were categorical that the day India attacked Darbar Sahib, the struggle for Anandpur Sahib resolution will be transformed into a struggle for an independent state of Khalistan.

Hitting out at those who have been demanding devolution of power or federal structure, Dal Khalsa leader Harcharanjit Singh Dhami said, “This talk of federalism is a mirage and a diversionary tactic. These are attempts to deviate the people from the pro-independence stance and tire them out”.