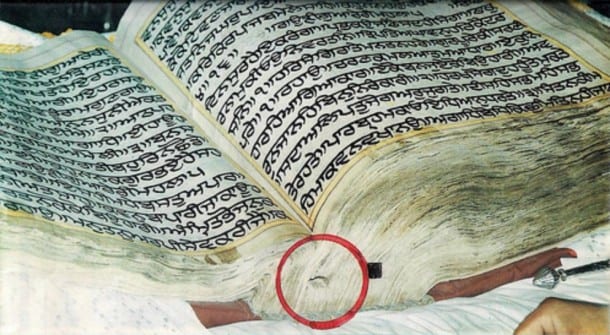 For the first time, the Shiromani Gurdwara Parbandhak Committee (SGPC) has resolved to display Guru Granth Sahib’s holy Bir for darshan. This historical saroop of Guru Granth Sahib Ji will be available for darshan from June 3 to 5, as part of the programs to commemorate the anniversary of the attack that demolished Sri Akal Takht Sahib, the highest Sikh temporal seat.

The decision was taken during a special meeting of the Shiromani Gurdwara Parbandhak Committee’s (SGPC) executive committee (EC) on Wednesday.

“It is an oozing wound that is still painful after 37 years. The available relics associated with this holocaust will be shown to the sangat so that future generations could remember the atrocities committed on the community,” she said.

She added, “The executive committee has decided to bring to the light of the sangat, the holy saroop of Sri Guru Granth Sahib which were injured during the holocaust along with other relics. During this week of martyrdom, the holy injured saroop will be kept for sangat darshan at Gurdwara Shaheed Ganj Baba Gurbakhsh Singh behind Sri Akal Takht Sahib from June 3 to 5. The bullet which had injured the saroop will also be displayed on this occasion.”

SGPC president said that the gold plates of Sri Harmandar Sahib and Sri Akal Takht Sahib, which were also shot upon the bullets in the military operation, would be soon kept for display.

“These gold plates will be adorned in the Bhora Sahib (base) of Sri Akal Takht Sahib and arrangements will also be made to show the historic Akalsar well of the sixth Sikh master, Sri Guru Hargobind Sahib to sangat. Very soon, the martyrs’ gallery being constructed with regards to June 1984 would also be inaugurated and a large model of the desecrated building of Sri Akal Takht Sahib would be installed here as well. The history related to this Ghallughara will be depicted digitally here,” said Bibi Jagir Kaur.

“The work to preserve the Khazana Deori (entrance on the right side of Akal Takht Sahib), which witnesses the military’s bullets, will also be started soon. Efforts will also be made to collect the details of Singhs (Sikh men), Singhanis (Sikh women) and Bhujhangis (Sikh fighters) killed during the June 1984 military attack”, she said.

Jagir Kaur said, “During the attack of June 1984, the central government of the time had not only demolished Sri Akal Takht Sahib, the highest institution of the Sikh community, but also targeted the sacred-most shrine of the world, Sachkhand Sri Harmandar Sahib. Foreign invaders like Zakariya Khan and Abdali also targeted Sikhs and Sri Harmandar Sahib, but the military attack of June 1984 is even more painful because it was carried out by the government of our own country. This Sikh holocaust will always be a part of the Sikh psyche.”

She said, “Recently, when I visited the injured holy saroop, my mind was melting. At that time, I thought that an executive committee meeting should be called to show this to the sangat.”

Jagir Kaur also said that the Jews had been brutally annihilated by Hitler and the German Nazis, but they got back on their feet with their courage and foresight. “The Congress government at the Centre did the same with the Sikh community, but we could not fully retain our relics. We are sorry for that”, she said.

On this occasion, the SGPC president appealed to the Sikh community to pass on this tragedy to their next generation and to observe Ghallughara Day on June 6 and pay homage and respect in the spirit of peace.