The holy saroop of Sri Guru Granth Sahib which was injured after being hit by a bullet during June 1984 Ghallughara (holocaust) at Sachkhand Sri Harmandar Sahib, was adorned for paying obeisance for sangat (devotees) at Gurdwara Shaheed Ganj Baba Gurbakhsh Singh Ji near Sri Akal Takht Sahib today. 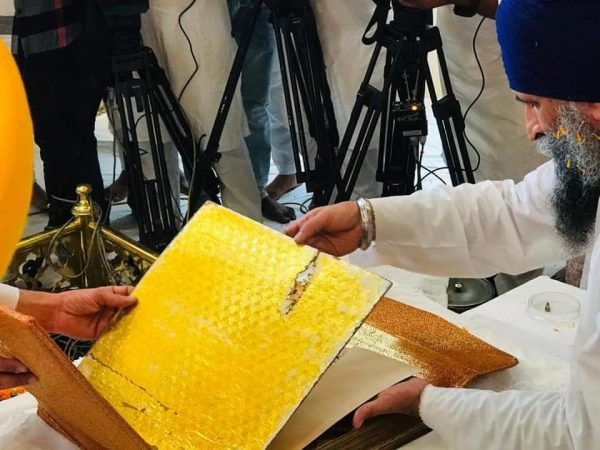 The bullet that was stuck in the holy saroop has also been kept at the gurdwara so that the sangat could have a glimpse of it as well.

This holy saroop was hit by a bullet 37 years ago in June 1984 during the military attack on Sri Darbar Sahib by the Indian government.

On Wednesday, June 2, 2021, the executive committee (EC) of the Shiromani Gurdwara Parbandhak Committee (SGPC) had decided to adorn this injured holy saroop for darshan (glimpse) to sangat, and accordingly, this holy saroop has been made public today.

Head granthi of Sri Harmandar Sahib Giani Jagtar Singh while sharing the painful story of the holocaust in June 1984, said, “A bullet had hit this holy saroop in the firing from the south entrance and it pierced till Gurbani of Sukhmani Sahib written in Gauri Raag.”

Speaking on the occasion, SGPC president Bibi Jagir Kaur said, “The military attack of June 1984 is a deep wound for the Sikh community and the coming generations should not forget what happened. What could be more tragic than the fact that the Congress government of our own country had deployed military on its own people? The Sikh community has been enduring this pain for the last 37 years and it has been decided to show the sangat the relics related to the June-1984 holocaust in view of the Sikh sentiments.” 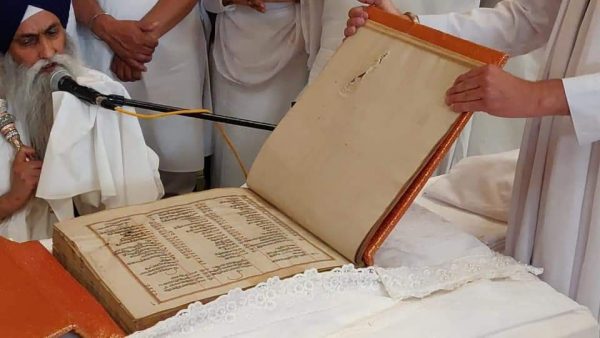 “The holy saroop was injured during the June-1984 holocaust, would be kept for paying obeisance for sangat till June 5 and further discussion will be taken after Shaheedi Samagam (Martyrdom Ceremony) on June 6. Soon the gold plates pierced with bullets would also be made public for the sangat”, said Bibi Jagir Kaur.

On this occasion head granthi of Sri Akal Takht Sahib Giani Gurmukh Singh informed the sangat about the service rendered to the injured holy saroop and the angs (holy pages of Guru Granth Sahib) affected by the bullet.

Giani Gurmukh Singh said, “From the cover of the holy saroop to the beginning of Gurbani the bullet mark has been kept intact.” 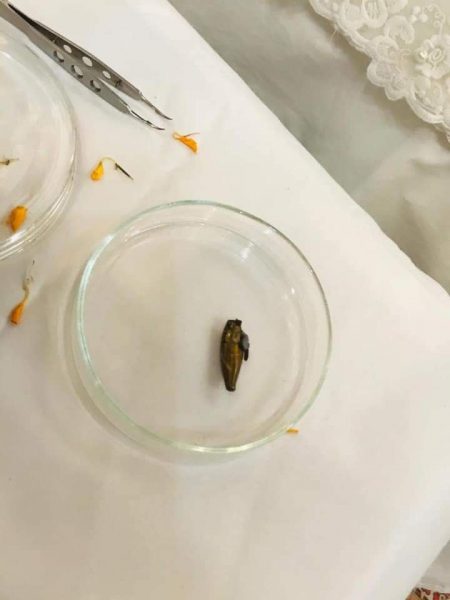 During this time a large number of devotees visited to have a glimpse of the injured holy saroop with an emotional mind.

Apart from arranging live broadcasts for the sangat from home and abroad, large screens were also set up near the Sri Akal Takht Sahib by the SGPC for the convenience of the sangat.

On this occasion, Gurbani kirtan was performed by the hazuri ragi jathas of Sachkhand Sri Harmandar Sahib and prayers were offered by Bhai Sultan Singh.