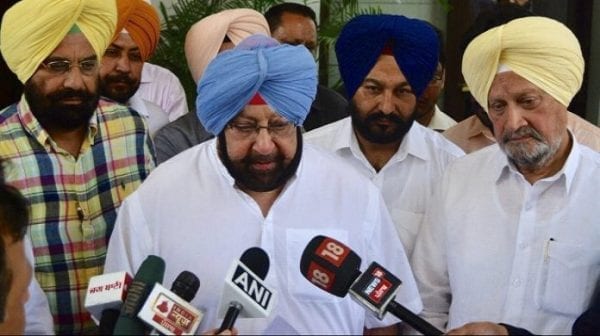 Even as the Government of India’s denying permission to Sikh jatha to go to Pakistan to attend the centenary event of the Nankana Sahib massacre, that was organized on February 21 at the birthplace of Sikhi’s founder Guru Nanak Sahib, hurt sentiments of the Sikh community across the world, Punjab Captain Amarinder Singh has remained silent on this issue thereby making his role dubious in this matter.

Objections are being raised over this silence, and various Sikh leaders have questioned it. They are saying that the Chief Minister takes no time in making statements against the Pakistan government, even on petty issues raked up by the Indian intelligence agencies and a section of Indian media. Still, he uttered not a single word on the wrongdoing of the Indian government.

It is being said that being Chief Minister of Punjab, Captain Amarinder, must have raised this big issue with Prime Minister Narendra Modi and Union Home Minister Amit Shah and persuaded them to allow the people to pay obeisance at one of their most sacred religious places as almost all the people going to Pakistan belong to his state. After all, this was a sheer attack on the religious freedom of the Sikhs, who are a minority in India. However, he did nothing in this direction, it is said.

“The ban was imposed on the Sikh jatha on February 17 evening, and it was scheduled to leave for Pakistan the next day. And the centenary event was held on February 21. So, we had time for three days to persuade the government to reverse the denial. Still, Captain Amarinder did nothing, said a member of the Shiromani Gurdwara Parbandhak Committee (SGPC), which was to send the jatha.

Replying to a query during an interaction, SGPC-appointed Akal Takht Sahib Jathedar Giani Harpreet Singh said the Chief Minister must have done so. “There are unconfirmed reports that the Captain Amarinder-led state government has made some negative remarks in the intelligence reports sent by it to the Government of India regarding the jatha.”

Questioning the silence, the Shiromani Akali Dal (SAD) president Sukhbir Badal said, “Even a few days back, few persons were granted permission to visit Pakistan at the instance of chief minister Capt Amarinder Singh. He also asked the chief minister why he had not taken up the need to accord permission to the Jatha with the centre.