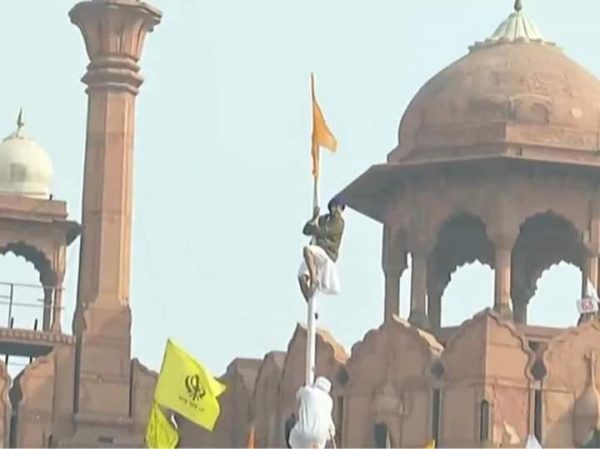 NEW DELHI—Actor turned activist Deep Sidhu is in the limelight after protestors hoisted the Kesri Nishan Sahib and the farmer protest flag at the Red Fort in Delhi on January 26. Deep Sidhu was seen amongst the crowd that hoisted the Nishan Sahib, and moments before the incident, he went live on Facebook.

Deep Sidhu had played a prominent role in gathering support for the farmer protests. He mobilized youth across Punjab when the protests were happening at the Shambu border. As protestors marched towards Delhi from Punjab / Haryana borders, he was amongst the first to arrive at Singhu. However, since then, he has been sidelined by the farm union leaders and not allowed to address the protestors from the main stage.

Yesterday, upon returning to the Singhu border, Sidhu faced the wrath of farm union supporters who chased him away from the protest site. Sidhu was seen taking away someone else’s motorcycle and spacing from the farmers who were hurling verbal slurs at him. Sidhu later arrived at a safe spot and went live on Facebook, stating that the incident happened due to the farmers’ emotions, and there was nothing wrong with hoisting the Nishan Sahib there.

However, Farm Union leaders are under immense pressure after the incident and have called for Deep Sidhu’s boycott. This morning, several farm union leaders have expressed their anguish with Deep Sidhu from the main stage.

Another prominent youth activist Lakha Sidhana who had played a key role in building support for the morcha, appealed to the youth to remain calm. “The protest is still on, and we are on a key crucial stage. My appeal to you is that we will be victorious. Small issues are bound to happen. We are fighting for our fights, and these incidents should not derail our main struggle. Let’s remain put and don’t give in to any rumors,” he said in a Facebook live video.