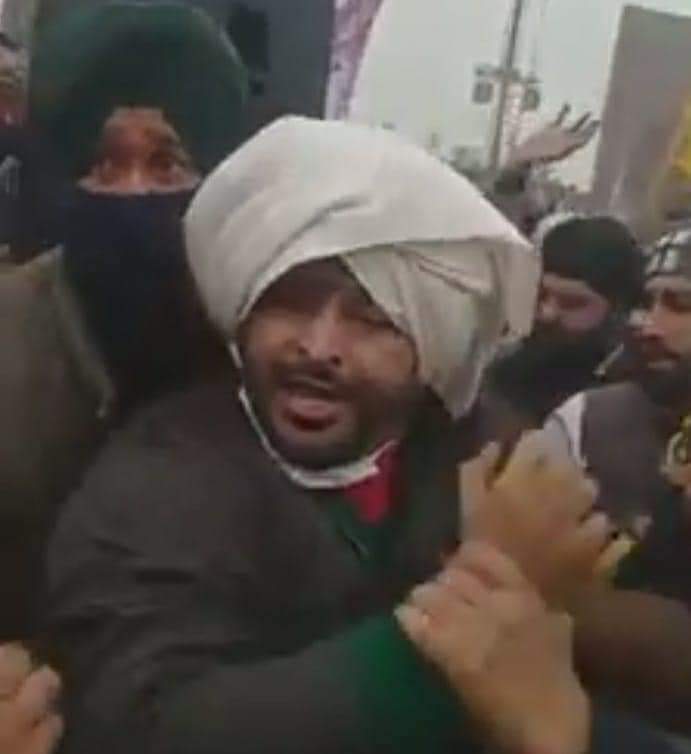 —Congress Member of Parliament (MP) from Ludhiana Ravneet Bittu faced the wrath of the farmers taking part in the agitation against three contentious farm laws at Singhu border of Delhi during a ”Jan Sansad” program organized at the Guru Tegh Bahadur Ji Memorial on Sunday. Videos of his manhandling and vehicle getting damaged went viral over social media.

In the incident, turbans of Bittu and Congress MLA Kulbir Singh Zira, who was accompanying him, were also tossed. Clips of the incident are being shared by all the channels; however, nobody has reported how this situation arose.

Reality Behind Why Bittu Was Targetted And Other Congress Leaders Spared

Eyewitnesses said Bittu was responsible for what happened with him as he provoked the farmers to do so. They cited that Congress MP from Amritsar Gurjit Singh Aujla also attended the programme, but nobody touched him, nor anyone spoke a single word against him.

“The person who is a traitor in Punjab is also one in Delhi. So, Bittu being targeted in Delhi is not an unusual thing.  Secondly, he uttered wrong words to the farmers. He called the farmers who carried the Kesri flag ‘Khalistani’ in a derogatory manner that showing wrath at him by the farmers was natural,” said a youngster.

He said, “When Bittu entered the complex of the venue, he was asked to leave the place, but he did not listen to the farmers. He started speaking objectionable words to the farmers thereby making them angry. And the angry farmers discharged their anger by thrashing him”.

Notably, Bittu is grandson of former Punjab Chief Minister Beant ‘Singh’ who was assassinated by the Sikh militants for eliminating thousands of Sikh youths illegally on pretext of countering “terrorism”. To justify the deeds of his grandfather, he usually makes the controversial statements that hurt sentiments of the Sikh community. He also passed negative and objectionable remarks on martyrs of the present Sikh struggle.

Recently, he made such remarks on SGPC-appointed Akal Takht Sahib acting Jathedar Giani Harpreet Singh. He used objectionable words for the Jathedar thereby hurting the sentiments of the community.

After Giani Harpreet Singh addressed the sangat present on bhog ceremony of mother of Paramjit Singh Bheora, who was convicted in the Beant ‘Singh’ assassination case, Bittu challenged him to contest the next parliamentary elections.

In a tweet on the eve of the 25th death anniversary of his grandfather, Bittu, said, “August 31 will be a decisive day this year. This is the day when Beant Singh Ji sacrificed his life for Punjab and the nation. If Jathedar Sahib, under the direction of SFJ (Sikhs for Justice) & Pannu (its convener) holds an ardaas for Dilawar Singh at Akal Takht Sahib, who was a prominent Khalistani and an assassin, it will provide evidential proof that the Jathedar stands for Khalistan & is working to fulfill SFJ’s paid agenda to disturb harmony and peace in Punjab (sic).”

Though the Jathedar never reacted to his statements, anger was prevailing in the mind of the people.