1. Gurlabh Singh, a 22-year-old farmer from village Dayalpura in Bathinda district, has passed away.
2. Yesterday, the Indian government had agreed to withdraw ordinances on the rise in electricity power tariffs and penalties for stubble burning. These ordinances have nothing to do with the original three bills regarding the private market, contract farming, and essential commodities. The deadlock over the main contentious issues of the repeal of three farm laws and a legal guarantee for Minimum Support Price (MSP) still continues.
3. BJP and Godi media continue propaganda by saying the farmers won 50% of the battle, but none of the 3 bills have been canceled. So the BJP is twisting yesterday’s meeting outcome and farmers should be careful.
4. BJP suffers heavy losses in Haryana municipal elections. They were expected to win most of Haryana but ended up losing a lot of it. Farmer protest seemed to have caused the swing in voting. It’s a huge problem for CM Kattar who dug up roads and had police attack the protestors weeks ago.
5. Haryana police try to stop more farmers to join morcha. Heavy-handed tactics by police, but farmers used tractors to break through barricades today.
6. Rajasthan farmers have removed barricades at the Rewari border and started proceeding towards Delhi.
7. Kerala Vidan Sabha unanimously pass a motion against BJP Modi agriculture laws.
8. BJP leaders complain the Police not doing enough in Punjab to protect them. They blame Capt Amrinder.
9. Nearly 50,000 farmers attend the Kisan protest in Tamil Nadu today.
10. Punjab Governor VP Singh Badnore has summoned the Chief Secretary as well as DGP Punjab in the wake of disconnection of power supply to Reliance Jio’s mobile towers in Punjab. It is clear that the pressure on the Punjab Governor to control the targeting of Reliance Jio towers is coming from the Centre.
11. Modi shows he is more concerned about Jio Towers rather than elderly farmers sleeping on the streets.
12. Ajmer Singh Lakhowal (BKU) in Oct was blamed for his unanimous actions to play in the hands of SAD-BJP to torpedo the farmer’s movement. Today he tried to be on stage to gain lost ground but the huge gathering didn’t allow him to speak a single sentence. He used to be a stalwart farmer leader. He had to beg pardon on stage and leave. This shows the real power of this agitation lies in the hands of awakened masses. The movement has a divine hand.
13. China’s Largest Bottled Water Owner Dethrones Ambani As Asia’s Richest Person
14. Adani raises $300 million via selling bonds at 3% on his Container Port.
15. Farmer rally held in Bhopal today.
16. Khalsa Foundation NZ in collaboration with NZ Sikh Youth, Nanaksar Youth, and United Sikhs Australia announces the installation of billboard screens supporting Indian farmers covering metropolitan cities all over New Zealand.
17. Motorcycle rally from Amritsar stopping at many Punjab cities will reach morcha site tonight.
18. In a major blow to caste propaganda played by some top thinkers who claim to be (I know it all about Dalits), Punjab BSP sent its jatha of over 1000 people to Singhu Border. This movement has the support of everybody irrespective of caste, job, religion, and land holding.
19. Zee News being reported on Facebook for hate speech by many people.
20. Stop Funding the Hate campaign starts against Zee TV. Uk Sikhs want advertisers to stop placing adverts with it. Southall Travel, East End Foods and Rajah been contacted. Southall travel confirms they have asked Zee Tv to not run their adverts until the farmers dispute not over.
21. Rep. Andy Levin of Michigan. “I have also been heartened watching democracy in action in India and the popular support this movement is garnering throughout the nation and the global Indian diaspora.”
22. Protest to be held on 15th Jan outside UN Food and Agriculture offices in Rome.
23. Sikh PA – A police officer that punched a Sikh man in the face at a London rally is being investigated for his conduct.
24. Following the incident in Ujjain of a Mosque demolition by RSS. Local Hindutva leader Acharya Shekhar put out a video giving violent threats to Muslims. Warning Muslim to refrain from “disturbing environment”, “We will create so many graveyards in MP that you will struggle for space to bury your dead.”
25. Godi media highlights that #Modishinesin2020 is trending in India. Considering how much manipulation of social media by BJP we have seen in 2020 with hundreds of Sikh pages blocked on FB, Instagram and Twitter. It shows that this trending is more BJP spin.
26. We leave this last update of 2020 dedicated to the bibian of the morcha. May they always stay in Chardi Kala. 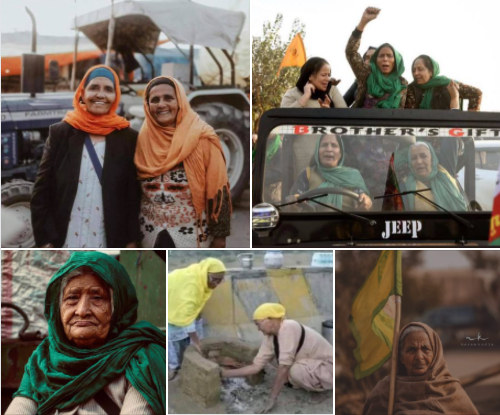