—Giani Harpreet Singh, SGPC-appointed acting jathedar of Akal Takht Sahib, has congratulated the Sikhs in Austria for getting Sikhi registered there at the official level and asked the Sikhs to take measures to get the same in other European countries.

The Sikh faith was registered as a religious denomination in the current month. With this provision, this faith has got official recognition in this country and the Sikhs living here will now be able to use Singh and Kaur after their forename, mention Sikhism as their religion, and register themselves as Sikhs, as per media reports.

There are seven gurdwaras in Austria out of which three are in Vienna with one each in Klagenfurt, Linz, Graz and Salzburg. The new status attained by the Sikh faith is the result of tireless efforts made by a Sikh committee that was set up by all the gurdwara managing panels here. This committee comprised the Sikh youngsters.

Expressing pleasure over the development, Giani Harpreet Singh said, “Khalsa constituted by ninth Guru Sri Guru Gobind Singh is hoisting the Sikh flag all over the world. This is a matter of pride for all of us that Sikh faith has been registered in Austria thanks to the efforts of local Sikh Naujwan Sabha”.

“These Sikh youngsters initiated the drive in November 2020 to get the faith registered and they have turned successful only in a year.  Certificate of registration was issued on December 17, while the name of the religion has started to be mentioned on the birth certificate of the Sikh children. With this historic recognition, Austria has become the first country in Europe where the Sikh faith is registered officially, for which the entire community deserves to be congratulated”, he said.

“Sikh sangat settled in other countries of this sub-continent should also take inspiration from the sangat of Austria and make efforts to ensure similar status is given to the Sikh faiths in their respective countries”, he added.

It is worth mentioning here that Sikhs’ battle for a separate tick-box for them in the 2021 census form in the United Kingdom continues.

Of late, the High Court in London dismissed a challenge brought by a British Sikh group against the UK Cabinet Office for its failure to incorporate a separate Sikh ethnicity tick-box in the next census in 2021.

Justice Akhlaq Choudhury handed down his judgment to conclude that the census, as currently designed, will not prevent people from identifying as ethnically as Sikh as a write-in option. 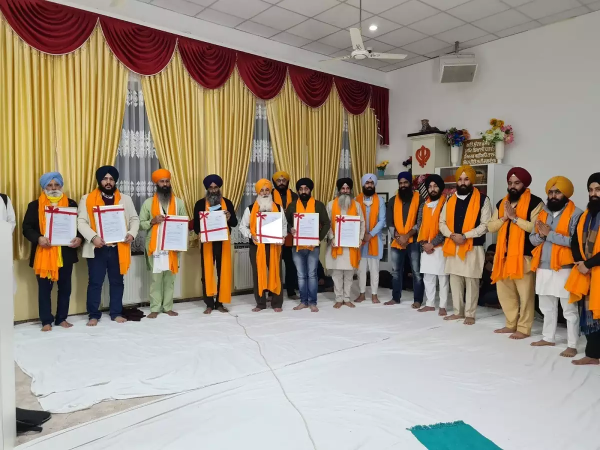 Sharing the development with media, Bhai Onkar Singh Vienna informed that the Sikh Naujwan Sabha moved an application to get Sikhism registered as a religion in November-2019. “On December 17, the Austrian government gave us the registration certificate,” he said while adding that the new born Sikh babies will now have a right to get registered their religion.

He further said that it is pride moment for all the Sikhs residing in Europe on having Sikhism recognized within a very short interval of time i.e. within 13 months only.

It is pertinent to note here that the Sikhs of almost all European countries including Italy have been making efforts to get official recognition for Sikhism for a long time but none of them have succeeded to date.