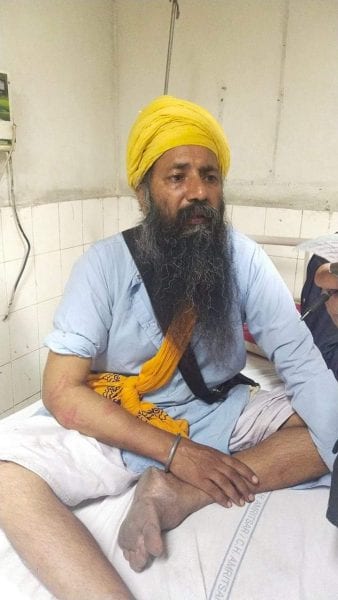 AMRITSAR SAHIB, Punjab—Bound to take action on the complaint of Sikh agitators who faced a deadly assault by the Shiromani Gurdwara Parbandhak Committee (SGPC) task force, the city police have reportedly registered a cross FIR against those who were supervising the assault, but with very minimal charges.

The cross FIR which is being kept secret by the Police, has been registered under section 323 (voluntarily causing hurt), 342 (wrongful confinement), 147 (rioting) and  149 (unlawful assembly) at Police Station (E-Division).

This action is milder than that taken by the Police against the victims, the Sikh activists who had been undertaking morcha (indefinite sit-in) to demand justice in the case of misappropriation in the SGPC’s publishing house, that led as many as 328 Guru Granth Sahib’s saroops going missing. The Police had to take this action as the victims sustained serious injuries and were hospitalized.

The victims are booked under harsh section—307 (attempt to murder) of IPC, besides others—452 (assault), 148 (rioting) and 149 (unlawful assembly). Bhai Balbir Singh Muchhal, one of the leaders of the morcha and victims, demanded harsh sections against the SGPC operatives who brutalized the Sikh activists in the style of mahants during British rule.

It is visible that the Police adopted a biased approach while taking action in this case and the SGPC, yet the SGPC president Gobind Singh Longowal is alleging that the Police have played a role in the episode against the gurdwara body. He also blamed the state government for creating such a situation that led to a bloody clash as two SGPC staffers also got injured when the Sikh activists used the traditional weapons in self-defense.

Meanwhile, Sukhbir Badal, president of the Shiromani Akali Dal (Badal) controlling the gurdwara body, condemned the cross-case registered against the SGPC members and officials stating that “they were subject to a violent attack in the Sri Darbar Sahab complex. This proved that the accused enjoyed the patronage of the Congress government”.

In a statement here, he said, “It was now clear that mischief-makers, who had created a ruckus in front of the SGPC office for one month before resorting to large scale violence last week, were sponsored by the Congress government”.

“There is no other reason for the Congress government to disregard the fact that members of the Satkar Committee had violated the sanctity of Sri Darbar Sahib and hurt the sentiments of devotees with their actions. Instead of taking strict action against them, the Congress government seems to be hell-bent on protecting such elements by registering counter cases against the victims in the case,” he added.

The Sikh agitators were attacked on October 24. The SGPC operatives thrashed them mercilessly with sticks and sharp-edged weapons by making them captive inside the head office of the SGPC.

Interestingly, the SGPC also got these Sikh protesters indicted under sections 307 (attempt to murder), 452 (assault), 148 (rioting), 149 (unlawful assembly) of the IPC.

Interacting with media on October 26, SAD (Democratic) religious spokesperson Bhai Mohkam Singh has strongly condemned the brutal thrashing and indictment of these Sikh protesters while terming it as an injustice and coercion.

“We will be staging protest against SGPC’s hooligan behavior and Police’s one sided stance near Maharaja Ranjit Singh’s statue situated on Heritage Walk Street from 12 pm to 2 pm on October 27,” he informed.