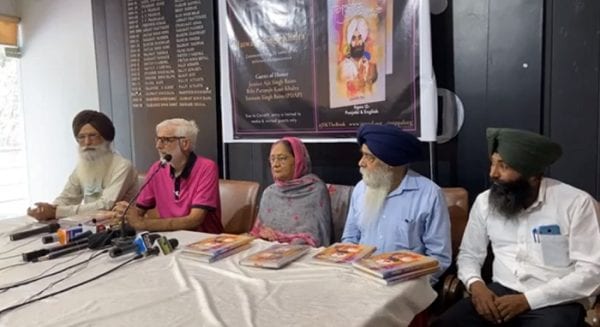 Addressing the gathering while releasing this book, Bibi Paramjit Kaur Khalra said that Bhai Khalra’s martyrdom will not go in vain as we all are committed to follow the path enlightened by him.

Shaheed Bhai Jaswant Singh Khalra was a human rights activist who exposed the cold-blooded massacre of Sikh youths by the Indian state. He had exposed the record of Durgiana Mandir’s crematorium where the Punjab police cremated dead bodies of around two thousand Sikh youths while registering them as unidentified.

Similarly, he also gathered records of other crematoriums of Amritsar district (especially Tarn Taran area) where he found thousands of similar entries.

He had anticipated that this number was more than 25,000 only in Majha zone of Punjab.

On September 6 in 1995, Khalra was abducted by the Punjab police cops from his Kabir Park based residence in Amritsar. He was kept in illegal custody and brutally tortured for more than a month to make him quit his work.

However, he didn’t give up his stance after which he was extra-judicially murdered by the cops led by the then SSP Tarn Taran Ajit Singh Sandhu. His mortal remains were drowned in the controversial canals supplying water from Harike wetland to Rajasthan.