CHANDIGARH, Punjab—For the first time in the history of modern India, the Indian Prime Minister replaced Ravana’s face on the effigies burnt across a number of locations in Punjab. In other words, the Punjab masses burnt Modi’s effigy on the 2020’s Dussehra to convey a strong dissent against Modi. 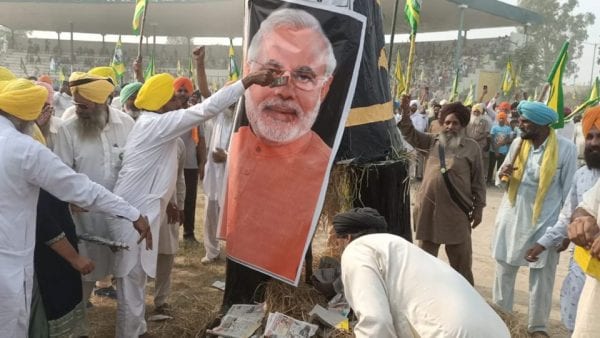 This trend got witnessed across several villages across Punjab including Mohali, Amritsar,  Gurdaspur, Bhawanigarh, Lambi, Nabha and other places in protest of the recently imposed draconian laws pertaining to procurement of farm produces.

It is pertinent to note here that the Narendra Modi-led Indian government has been continuously imposing draconian laws to please the right-wing section of the Hindu community and its election sponsoring corporate lords like Ambanis and Adanis.

In August last year, Modi led Indian government had snatched the special status of J&K masses by abrogating Article 370 of the Indian constitution while confining the entire J&K state people in their homes.

In November last, Modi led the Supreme Court to favor the Hindu community while snatching the whole land of Babri Masjid from Muslims in Ayodhya.

Now, Modi-led Indian government has paved way for the entry of corporate firms in the agriculture sector while putting the livelihood of hundreds of millions of farmers at risk in India.

Agriculture is the lifeblood of Punjab’s economy but now the Punjab farmers are worried about their future because the entrance of corporate firms in the agriculture sector can prove fatal for the prevailing system of MSP (Minimum Support Price).