—An internal office note of the Shiromani Gurdwara Parbandhak Committee has been accessed by Sikh24 which exposes several discrepancies about the missing saroops of Sri Guru Granth Sahib. In this office note signed by SGPC Chief Secretary Dr. Roop Singh on February 24, 2020, it can be clearly read that 80 saroops were damaged in the firing incident that occurred on May 19, 2016. 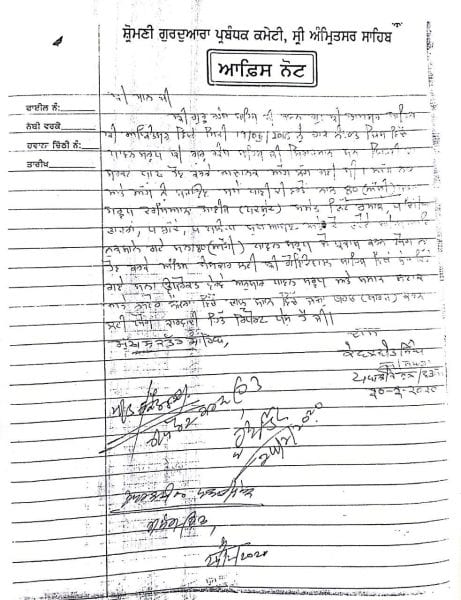 It is pertinent to note here that the former assistant supervisor of SGPC publication department had earlier made this revelation but the its own handlers were consistently denying this fact while claiming that only 14 saroops were damaged during this incident.

However, the SGPC’s internal office note has left no way out for SGPC’s handlers to hide their lies as it is clearly written in the note that 80 damaged saroops were sent for cremation to Goindwal Sahib.

On being contacted by Sikh24, SGPC’s senior vice president Rajinder Singh Mehta tried to evade situation by saying that only 14 saroops were heavily damaged while the remaining saroops were minutely damaged due to water showers used to put control over the fire. He claimed that the rest of saroops were repaired.

Rajinder Singh Mehta’s claim is contrary to the SGPC’s internal office note which clearly mentions 80 saroops were sent for cremation to Goindwal Sahib.

Why is the SGPC hiding the actual figure of damaged saroops?

After the sacrilege incidents of 2015, the SAD-BJP led Punjab government was under fire due to its inaction for tracing the real perpetrators of these incidents.

It is a widespread perception that the SAD president Sukhbir Badal had directed the then SGPC’s executive to hide the actual figure of damaged saroops keeping in view the 2017 assembly polls.