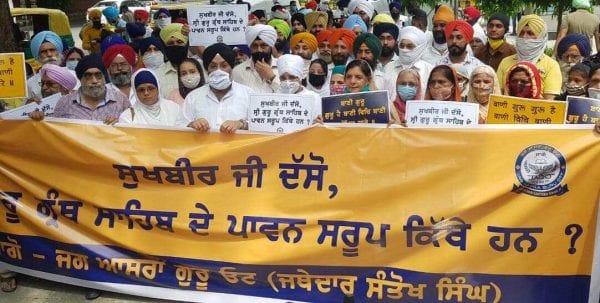 After the recitation of Japji Sahib, all the protesters performed Ardas asking Waheguru to awake Sukhbir Badal’s conscience.

Addressing the gathering on this occasion, Manjit Singh GK said that if Sukhbir Badal doesn’t break his silence within 7 days then they will launch a campaign to surround the residences of Delhi based Akali leaders. “The SAD (Badal) controlled SGPC office bearers are claiming to make a financial recovery against the missing saroops but we want to know where the Almighty Guru Sahib,” he added.

GK said that every detail of this tragic event was in Sukhbir Badal’s knowledge and all this happened with his consent. He apprehended that the missing saroops might be in the custody of non-Sikh cults where no proper code of conduct is followed.

It is pertinent to note here that these protesters had also planned to surround Sukhbir Badal’s residence situated on Safdarjang but the police didn’t permit them to go there.