She made this appeal through her Twitter handle on which she remains active. “We welcomed Ram Mandir in Ayodhya. Please Sir, with same devotion save our Gurdwaras—Gian Godri in Haridwar, Dangmar Sahib, Sikkim, and Mangu Mutt, Puri, Odisha since these holy shrines are directly linked to our Sikhism founder Guru Nanak Dev Ji @PMOIndia @RahulGandhi“, she stated in a tweet on Saturday (August 8, 2020).

Mrs. Sidhu, who is the wife of former Punjab Minister and incumbent MLA of Amritsar (East) Navjot Singh Sidhu, tagged this tweet to Modi and Rahul Gandhi to raise the long-pending concern of the Sikh community.

Her views are similar to that of Giani Harpreet Singh who on Friday congratulated the Hindus for the inauguration of the construction, but wanted restoration of certain gurdwaras, which were demolished in various states in the country. He too named these three gurdwaras mentioned in Mrs. Sidhu’s tweet.

In another tweet shared earlier, She says, “Just like we Sikhs are emotional about our Gurdwaras, we should respect the feelings of Hindus and many others who believe in Bhagwan Ram and celebrate the inauguration of Ram Mandir….”

The ceremony of the Ram Temple became a hot topic with the Sikhs after former Takht Patna Sahib jathedar Iqbal Singh attended it. By doing so, Giani Iqbal Singh went against Akal Takht Sahib’s edict against the Hindu extremist organization RSS and made the remark on the occasion that Sikh Gurus were descendants of Lord Ram.

Giani Iqbal Singh is facing backlash from the Sikh community for his remark. Besides, Modi made a statement that Guru Gobind Singh Ji also penned a version of Ramayana in praise of Lord Ram. The Sikhs are considering these remarks as a larger agenda of Hindutva elements to incorporate Sikhi in Hinduism by damaging its distinct identity.

Notably, the RSS planned to ensure the presence of jathedars of all five Sikh Takhts at the Ayodhya event. However, no jathedar or any other prominent Sikh leader attended these ceremonies.

In October 2019, Giani Harpreet Singh had demanded a ban on the RSS while terming the ‘Hindu Rashtra’ statement of its chief, Mohan Bhagwat, divisive. 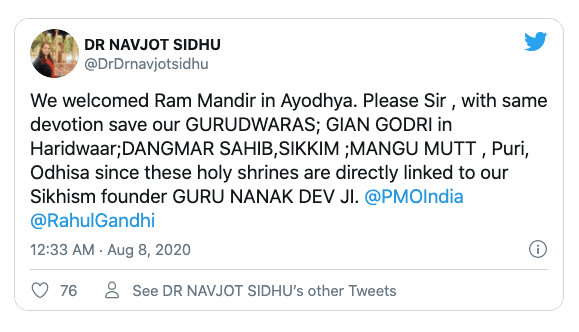