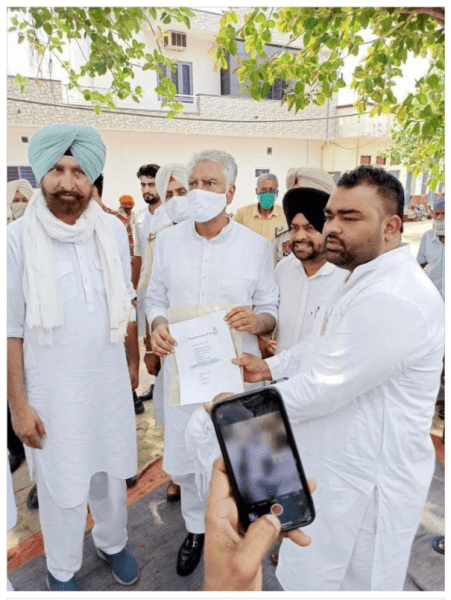 NAKODAR, Punjab—It was 34 years ago when five scriptures of Sri Guru Granth Sahib Ji were set ablaze by miscreants on February 2, 1986, here at village Littran in Nakodar. Following the incident of sacrilege, four Sikh youth were shot to death in cold blood by the police here on February 4, 1986. These youth were peacefully protesting to seek the arrest of culprits responsible for the sacrilege incident.
One of the youth killed by the police – Bhai Ravinder Singh belonged to village Littran. The village Panchyat of this village is still seeking justice 34 years ago. In relation to seeking justice for the victim family, the village Panchayat today gave a memorandum to the president of Punjab Congress, Sunil Jakhar.
In response to the demand of the village panchayat for seeking justice, Jakhar promised to take up the case with Punjab Chief Minister Captain Amarinder Singh.
Village Panchayat of Littran told Sikh24 that while many known the details of Bargari incident since it happened not too long ago, many of our adults have forgotten what happened in Nakodar 34 years ago.
“The incident in Nakodar that took place in 1986 is similar to what happened in Bargari. There are many similarities in the occurrences. First of all, it was Shiromani Akali Dal that was in power when both sacrilege incidents happened. Secondly, the Punjab police were involved in firing upon innocent Sikhs,” the village sarpanch Roopinder Singh Bhinda told Sikh24.
“We met with Punjab Congress President Sunil Jakhar to ask him to compel Justice Gurnam Singh Commission to publicize the report of Saka Nakodar investigations. It’s the need of the hour for people to find out what exactly was documented by the Commission and for cases to filed upon guilty police officers,” Bhinda added.
Bhai Ravinder Singh was just 19 years ago when was shot dead by the Punjab police.