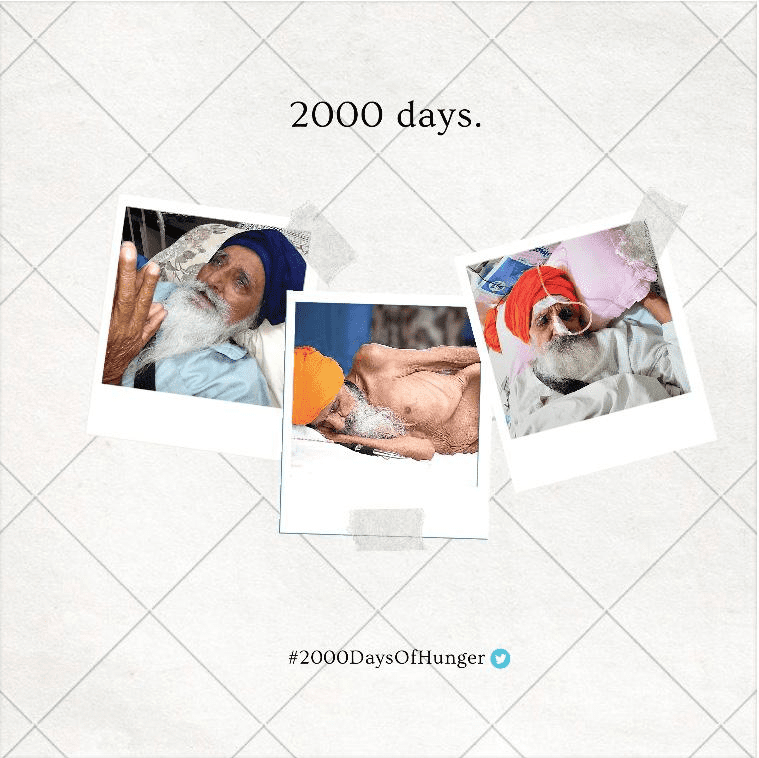 During these 2,000 days of his struggle, the Indian state used almost every tactic of physical and mental torture on Bapu Surat Singh Khalsa to force him to end his peaceful protest. However, due to his steadfast resolve, the Indian Government did not succeed in its motives.

Currently, Bapu Surat Singh Khalsa is detained in the DMC Hospital of Ludhiana where he is being force-fed through nasal tubes against his wish. He has continued to raise voice against the unjust imprisonment of all political prisoners, regardless of their religion and background. He also continues to be vocal against Government injustices to the people of Punjab.

In these 2,000 days, the Sikh Nation has witnessed a lack of spirit and courage by the Sikh leadership in continuing the struggle with Bapu Surat Singh. While he has continued the peaceful protest, we have witnessed the rise and fall of a number of struggles within the Panth. Bapu Surat Singh’s family remains committed to serving their old aged father.

It is worth mentioning that the murder of his son-in-law Satwinder Singh Bhola proved a major setback to Bapu Surat Singh Khalsa’s struggle in terms of public momentum, but still, old aged Bapu has shown resilience, patience, and courage in carrying forward his struggle.