DAVIS, California, USA—From the Netherlands to California and London to Washington, DC, statues of Mohandas Gandhi are being defaced with spray-painted accusations of “racist” and “rapist” in the wake of the Black Lives Matter protests which were sparked by the May 2020 murder of George Floyd.

In mid-June, “rapist” was spray-painted at the base of a Gandhi statue in Davis, CA; a week later, it was protested by approximately 100 people. 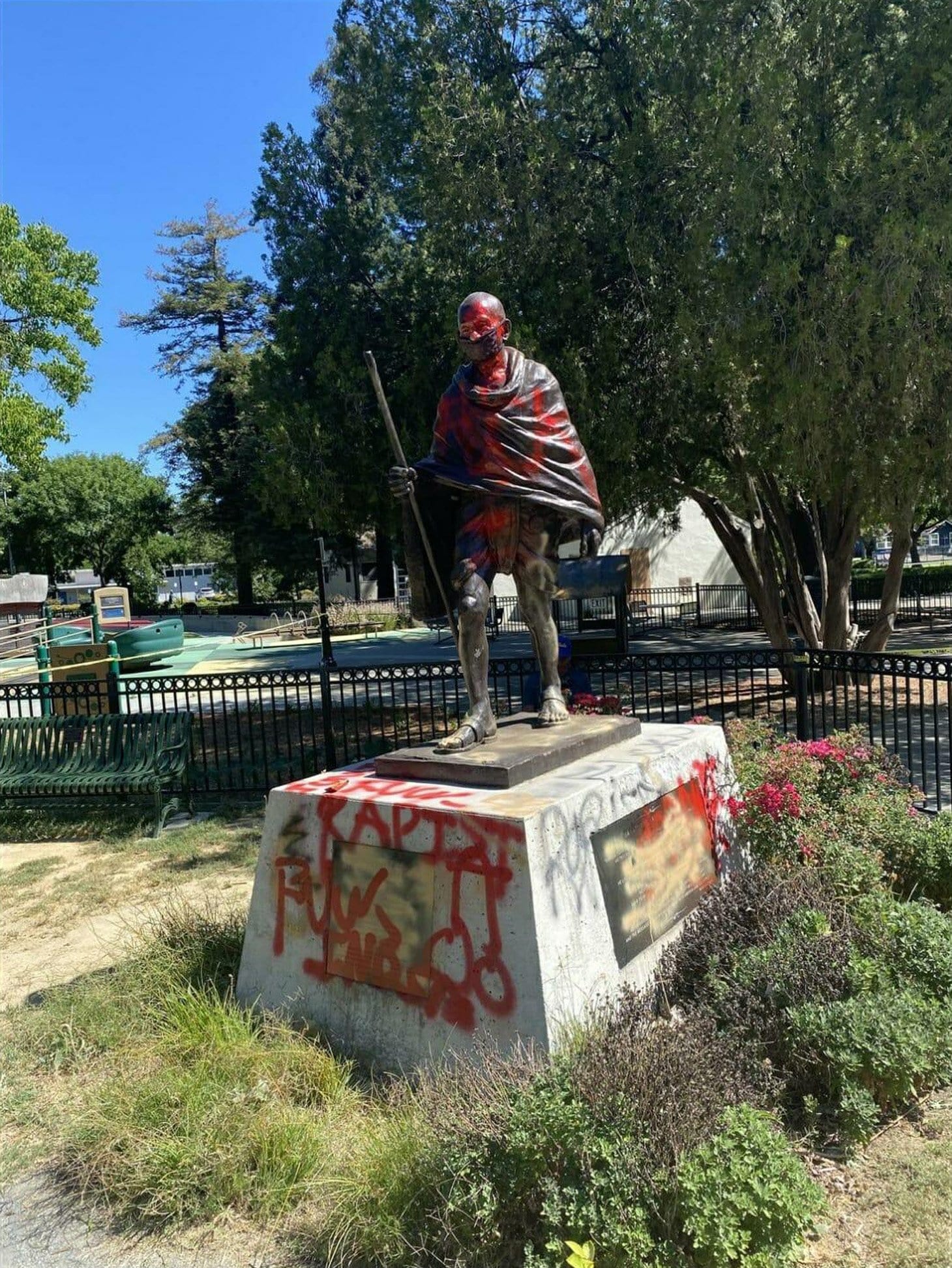 “Today, America is confronting its hidden sexist garbage that has been piled up for too long,” said former founding director of Organization for Minorities of India (OFMI) Bhajan Singh at a June 20 protest against the Davis statue. “Yet no one wants to confront Gandhi. He slept naked with and raped his two grandnieces. A statue of Gandhi here is bad for the women of America. A statue of Gandhi here in Davis gives the city a bad name.” 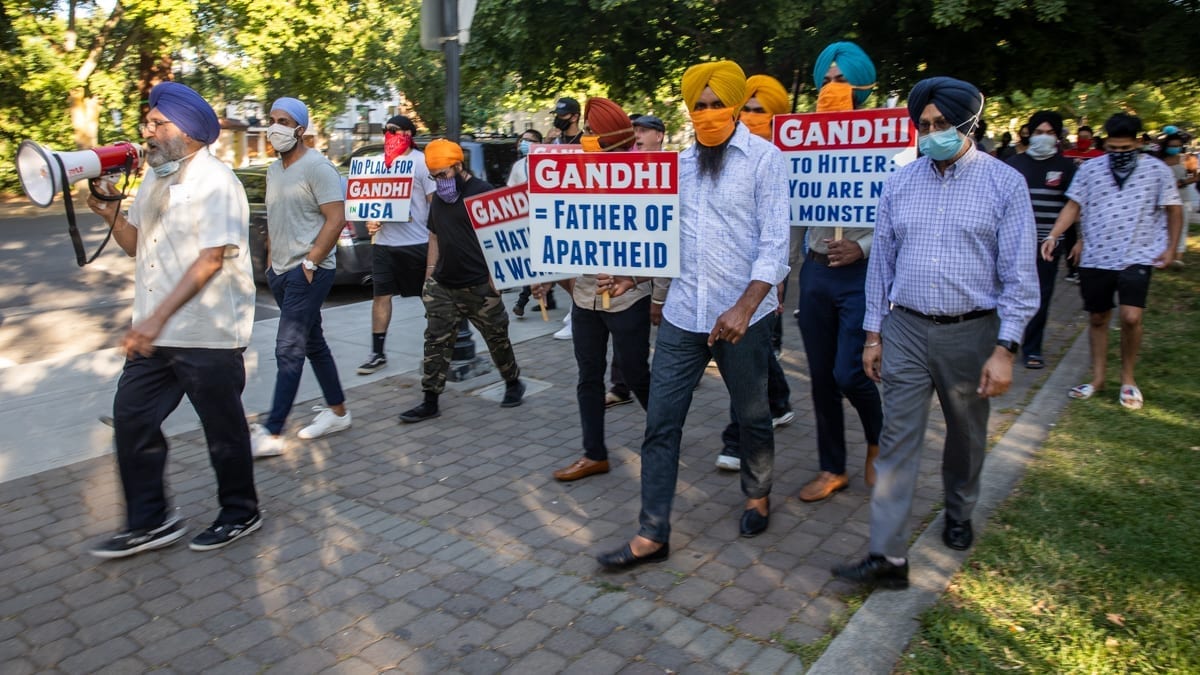 Since the beginning of June 2020, at least 11 Gandhi statues in five countries have faced vandalism, calls for removal, or both.

The first was a Gandhi statue outside the Indian Embassy in Washington, DC. On June 2, the statue was spray-painted with orange paint reading both “rapist” and “racist.” 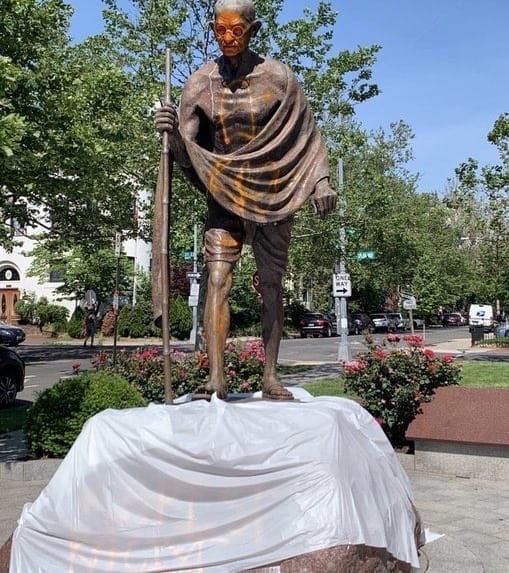 “While African intellectuals are leading the charge to remove Gandhi statues from their land, Black Lives Matter protestors are toppling statues of slave-owners erected on American soil,” says OFMI’s Arvin Valmuci. “This is a moment to stop, take stock, and apologize for promoting people who advanced doctrines of racism and segregation. Gandhi has rightly been described as the father of apartheid for his role in spreading racism and campaigning for racial segregation in South Africa in the early 1900s.”

On June 8, protestors wrote “racist” at the feet of a Gandhi statue in Parliament Square in London. They also splashed the statue with white paint. Unveiled in 2015, the statue first faced protest when it was proposed. “When I learned about what he did to women including his own grand-niece, I was disgusted,” said Indo-British Heritage Trust founder Kusoom Vadgama. “Gandhi chose a teenage blood relation and a great-grand-daughter-in-law for his sexual whims. It is as unforgivable as it is unbelievable.” 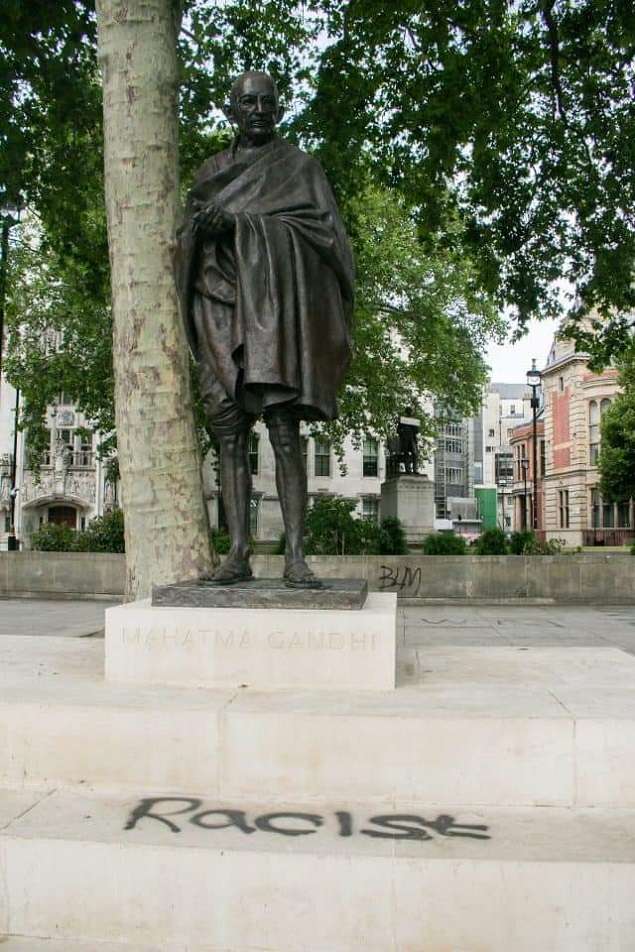 On June 17, a Gandhi statue in Amsterdam was covered with red paint while “racist” was spray-painted on the statue’s base. 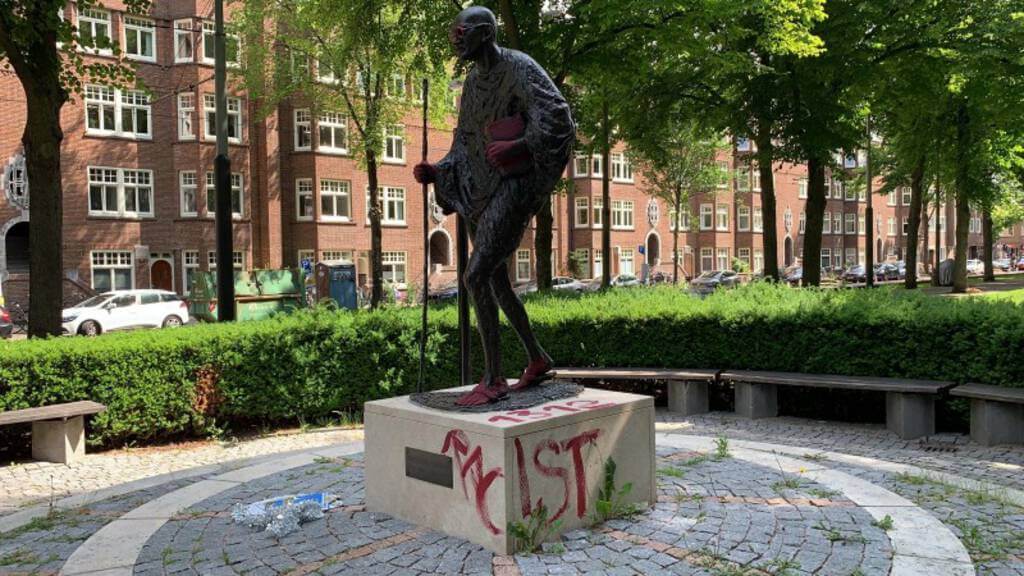 A petition to remove Gandhi’s statue from Leicester, UK collected over 6,000 signatures. “For years he has been idolized and taught in school curriculum,” stated the petition, which called Gandhi a “racist and sexual predator.”

Over 3,900 have signed a petition to remove Gandhi’s bust from the campus of Fresno State University in California. “The popular image of Gandhi is a myth,” states the petition. “The lack of efficient methods of communication and documentation in the past allowed Gandhi to effortlessly create a convincing but false image of himself.” The statue was protested by OFMI and other groups in 2013. The protest caused cancellation of a planned event celebrating Gandhi’s birthday.

2,500 have signed a petition to remove a Gandhi statue from Carleton University in Ottawa, Canada. “We as an institution cannot claim to champion diversity and seek to eradicate institutionalized racism while symbols like this are still present on our campus,” states the petition. “However revered a figure he may be in the world of academia, we must acknowledge the pain and discomfort this statue causes our students. We must remove this statue from our campus.”

OFMI protested the statue’s 2011 installation. “I’m really kind of shocked that the university would even consider installing a statue of someone who supported segregation in South Africa before apartheid and worked to create a Hindu India, not a secular country,” said Valmuci at the time. It has faced continued calls for removal. In 2018, Carleton’s Institute of African Studies Student Association president Kenneth Aliu stated, “He utilized anti-Black racism as a weapon to bargain with the British about the subjugation of Indians living in South Africa. Instead of a pacifist liberator, he actually furthered the entrenchment of the caste system in India as well.”

Over 1,600 have signed a petition to remove the Davis Gandhi statue. When the statue was unveiled in 2016 by Indian Consul General Venkatesan Ashok, over 75 people protested the event. “Gandhi is a five-time Nobel Peace Prize reject,” said OFMI’s Bhajan Singh at the protest “A warmonger, a racist, a sex-offender. He is rejected by India’s majority of the population. We beseech the Americans, we beseech those who are ignorant. Wake up to Gandhi’s reality. Reject Gandhi!” 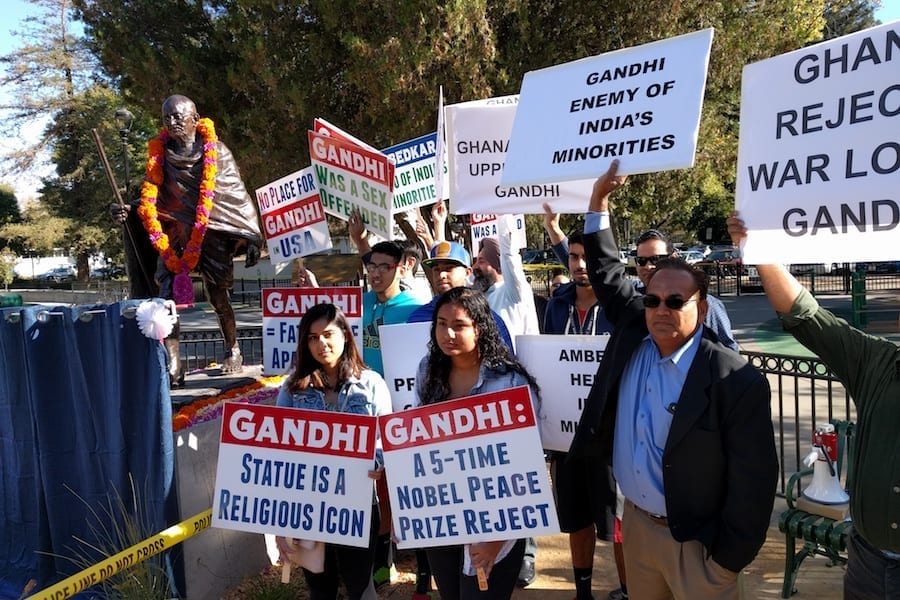 A petition to remove a Gandhi statue in Winnipeg, Canada has gathered over 1,000 signatures. “The Gandhi statue has been a symbol of minority oppression since its debut,” states the petition. “It has been difficult walking past a celebratory statue of a man who was outwardly racist and pedophilic.”

Other petitions call for removal of Gandhi statues in New York City, in London, in Cardiff Bay (UK), and in Jamaica.

“For the minorities of India, Gandhi’s real legacy will always be strife, division, and the mass violence of the Partition of the Indian subcontinent, which left millions dead and two warring nations whose countries are founded on religious lines,” says Valmuci. “Reevaluating Gandhi and recognizing the damage he did is integral to achieving peace in the subcontinent.”

:dateline:Punjab Chief Minister Captain Amarinder Singh is under a cloud for the entire state where he is ruling after he made an appeal to...
Read more