CHANDIGARH, Punjab—While the Sikh community was still awaiting the safe return of Nankana Sahib based Sikh girl Jagjit Kaur, another minor Sikh girl Resham Kaur has been abducted and converted to Islam in Jacobabad district of Sindh province in Pakistan. 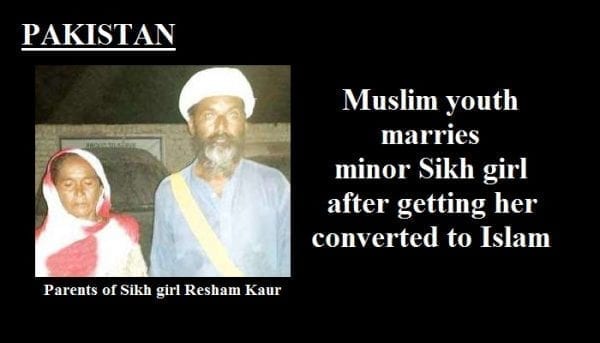 On June 18, a Muslim youth named Wazir Hussain lured Resham Kaur to adopt Islam at Dargah Amrut Shariff after which he married to her. According to the official Islam adoption and marriage certificates, Resham Kaur’s new name is Beesharan.

An FIR under abduction charges has been registered in the concerned police station against Wazir Hussain S/o Dil Murad Khan, who is a resident of village Sohnipur in district Zaffrabad of Sindh.

Sources have revealed that raids are being conducted to arrest Wazir Hussain and his accomplices who helped him in abducting Resham Kaur and getting her converted to Islam.

However, Wazir Hussain has knocked the doors of Court seeking scrapping of FIR while claiming that his wife Resham Kaur turned Beesharan was not minor and she willingly adopted Islam to marry him.