CHANDIGARH, Punjab—A painful video has emerged over social media in which a mob of Hindu residents could be seen attacking an innocent Sikh youth while disrespectfully pulling his hairs. The incident occurred in village Sherpur of Uttar Pradesh on June 14. 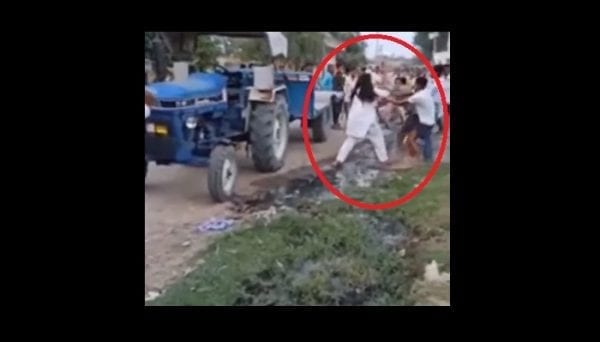 Sources have informed that two Sikh youths were passing through village Sherpur on June 14 when their car suddenly touched the car of another youth who is learned to be a resident of the same village.

Following this, heated exchange of arguments occurred between the duo sides after which the local village youth called his clan members to dominate over Sikh youths.

At this, one of these Sikh youths took out his Kirpan to defend himself, but the locals called up police cops.

When police cops reached there, another Sikh youth went for verbal talk to settle down the quarrel, but the villagers launched attack on him in the presence of cops. The attackers removed his turban and threw it in nearby open sewerage. They also pulled hairs of Sikh youth during this attack.

After this incident, a wave of outrage spread across the Sikh community living in nearby areas. On June 15, local Sikhs of Gajraula and Dhanaura staged a protest outside the local police station seeking indictment of attackers.

Till date, there is no information about any action against these attackers.