SRINAGAR, J&K—On April 20, the Jammu & Kashmir government came up with 4% reservation for Pahari Speaking People in direct recruitment and admissions in professional colleges while notifying amendments in Jammu and Kashmir Recruitment Rules 2005. However, insufficient clarification about the parameters to be used for identifying the Pahari Speaking People (PSP) has left the Kashmiri Sikh in an extreme confusion and they are feeling a fear of exclusion from PSP category despite being natives of Kashmir.

“Pahari Speaking People (PSP) means the persons belonging to Pahari Community, clan or tribe having distinct cultural, ethnic and linguistic identity to be identified in such manner as may be prescribed and by such Authority as may be appointed by the Government in this behalf,” reads an addition of a new clause xi (a) in Rule 2 of Jammu and Kashmir Recruitment Rules 2005. 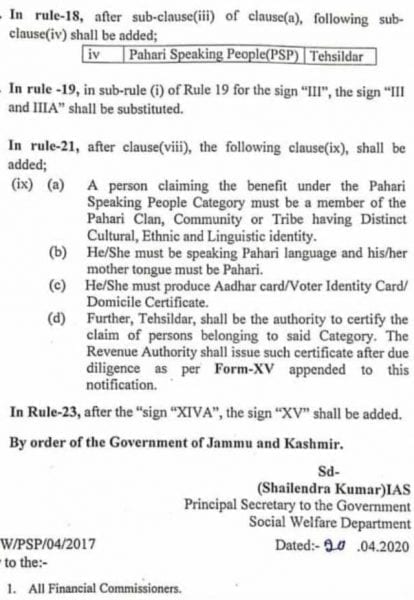 Seeking clarification from the government, Kashmir resident Kulbir Badal has questioned “whether Sikhs who speak Pahari and Pahari is their mother tongue, but use Gurmukhi as script for writing Pahari are entitled to get the reservation?” 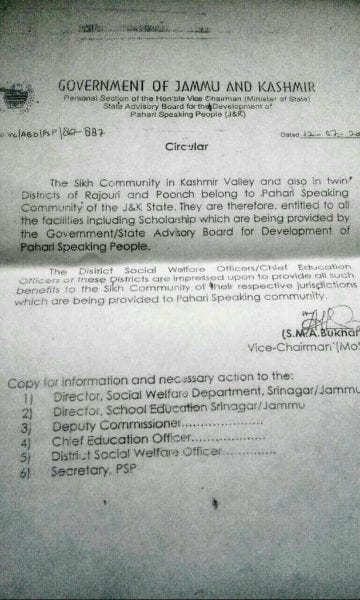 “The Pahari language is spoken by Muslims, Sikhs, Hindus and Christians living in UT of J&K. So, we urge the LG Grish Chandra Murmu to include all Pahari speaking people that are still left behind,” Sukhbir Singh further said.

It is pertinent to note here that the Pahari language doesn’t have any particular script like Gurmukhi for Punjabi, Devanagari for Hindi etc.

Another Kashmir resident Sikh Angad Singh said the Kashmiri Sikhs were going to face discrimination in the new reservation policy of J&K government. “We, the Kashmiri Sikhs, always stood against government’s oppression so now it seems like people in power are taking revenge from us,” he said while seeking clarification from the government.

Geet Kaur, a female Sikh activist from North Kashmir, said that almost all Sikhs of J&K speak Pahari but write it in Gurmukhi and Pahari is their mother tongue. “We have faced discrimination from all earlier governments so now we demand this quota as living in  a disputed area like Kashmir is not easy for us and that too as a micro-minority. At least, we should be given this quota to ease our lives here. We want justice,” she said.