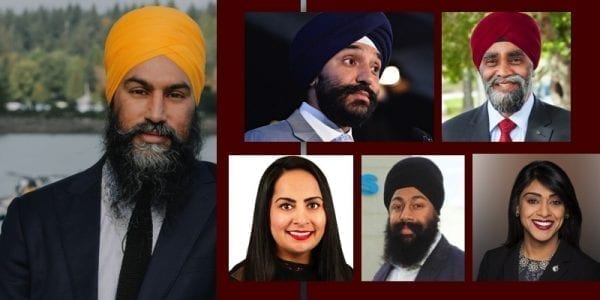 The following hashtags #SinghUpSwing, #Jaggernaut and #UpRiSingh” were used throughout the election campaigns to highlight Jagmeet Singh’s growing popularity. Although Jagmeet Singh won from Burnaby South, his party only managed to nab 24 seats. Nevertheless, the entire campaign brought a lot of visibility to the small but vibrant Canadian Sikh community.

2011 census of Canada recorded that Sikhs made up 1.4% of the population. Politicians of Sikhs backgrounds now make up 5% of the Canadian parliament.

The World Sikh Organization of Canada offered congratulations to Prime Minister Justin Trudeau on being re-elected in Canada’s 43rd general election.  The Liberal Party of Canada will return to Parliament Hill with a minority government.

“We offer our congratulations to Prime Minister Justin Trudeau and the Liberal Party of Canada on their victory.  We look forward to working with this government in addressing some key issues we identified during the campaign, including the rise of intolerance and Bill 21 in Quebec, which poses a critical threat to human rights in Canada.

We also would like to extend our congratulations to NDP Leader Jagmeet Singh on being the first Sikh and the first person of colour to run for Prime Minister of Canada.  This was a historic achievement, not just for Sikhs, but for all racialized communities across Canada.  Jagmeet Singh provided an important voice on the issue of racism in Canada and we look ahead to his continued leadership on this issue.

Sikh Canadians have once shown they are an integral part of Canada’s political fabric by playing an important role in every political party during this election.  We look forward to seeing all elected Sikh MPs serving their constituents and their country in the next Parliament.”

Jagmeet Singh remained a star performer as he crushed his opponents during debates. Many prominent political analysts praised him for his performance.

“He was the most easy leader to connect with on a personal level, [he] felt somewhat the most authentic… he comes across to people as sort of a real person in the moment, as opposed to a politician.” – Shachi Kurl, Angus Reid

“On his show tonight Charles Adler asked me to give each leader a letter grade for their campaign performance. My grades: Jagmeet Singh gets an A, Justin Trudeau a B, Andrew Scheer a C+, and Elizabeth May a C.” – Keith Baldrey, Global News

“And the stunning rise of Jagmeet Singh, leader of the New Democratic party, threatens to steal away young voters at a time when Trudeau needs them most.” – Leyland Cecco, The Guardian

“Singh has seen a bump in recent weeks, both in national voting intentions for New Democrats, and in his own personal favourability ratings, that one pollster characterized as “through the roof.”” – Alex Ballingall, Toronto Star

“As Trudeau sheds votes, the NDP has been gaining. A month ago, pundits would have told you the NDP was toast, and the Greens were the flashy new progressive choice; now, as the Greens slink back in the polls, Singh is spending the final days of his campaign in their back yard, travelling across Vancouver Island and hugging every man, woman and tree he meets. And why not?” – Michael Fraiman, Maclean’s

“The NDP is now back in the game on environmental issues by recruiting so many trusted voices to its side.” – Charlie Smith, Georgia Straight

“After a campaign of gridlock and bickering by the front-runners, something happened last week. That something was positive movement for NDP Leader Jagmeet Singh and his party. ” – Chris Hannay, Globe and Mail

“Jagmeet Singh’s popularity is surging and the NDP is finally benefitting from it.” – Lorne Bozinoff, Forum Research