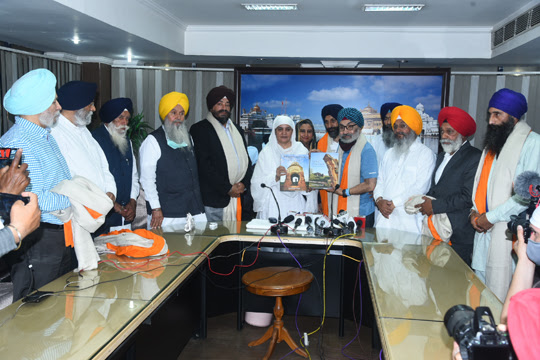 United Sikh Mission (USM), a non-profit organization based out of California, is working to install a solar farm to provide clean energy to Sri Darbar Sahib in Amritsar. This project is part of a larger initiative by the SGPC to make Sikh institutions (historical Gurdwaras and educational institutes) more energy efficient.

Earlier today, a delegation of the United Sikh Mission was honored at Sri Darbar Sahib for their pledge to seva. Namely, Rachpal Singh Dhindsa led the delegation and promised the SGPC to provide financial assistance to install the solar farm. Prominent SGPC officials were present when USM officials were honored.

The solar farm being installed will be one megawatt, cost Rs. 8 crores (roughly USD 1 million). Commissioning of the solar system would save more than Rs. one crore annually. SGPC has plans to install similar size solar plants at other Sikh historical shrines, first starting with the Takht Sahibs (seats of Sikh temporal thrones).

While honoring USM sevadars, SGPC President Jagir “Kaur” appreciated the efforts of the Sikh community living abroad. She said just projects are possible with the grace of Guru Sahib and the commitment of diaspora.

United Sikh Mission principal officer Rachpal Singh said, “we are thankful to Guru Ram Das, who has kindly chosen us for this service. Every Sikh living abroad longs for the services of historical Gurdwaras located in Punjab and elsewhere.”

Talking about the project, he said that the work would complete in about four months. “We have received proposals from seven companies, which are being considered for this project, and we are working to find the best contractor,” he added.

USM volunteers have been involved in several humanitarian and relief projects in Punjab and parts of India. Namely, their volunteers have led services to provide medical assistance to farmers protesting at various Delhi borders.