NEW DELHI, India—The tireless efforts of DSGMC’s legal team today bore fruit when a local court of Delhi granted bail to youth farmer Ranjit Singh in an FIR No. 49/2021 registered in Alipur police station. Notably, the Delhi police had charged Sikh youth Ranjit Singh with the attempt to murder after arresting him from the Singhu border in the last week of January. 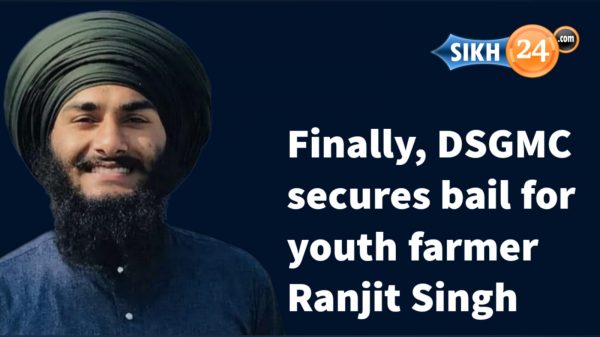 Sharing the development with media, DSGMC president Manjinder Singh Sirsa informed that the Court had rejected the first bail plea of Ranjit Singh on March 13 after which the DSGMC’s legal team again moved a plea for his bail on March 15 and succeeded in securing bail for him today. He specially thanked Advocate RS Cheema who led the legal team DSGMC in achieving this milestone.

Speaking to Sikh24, Ranjit Singh’s brother Pardeep Singh has informed that he will submit a surety bond worth INR 50,000/- tomorrow after which Ranjit Singh would be able to come out.

Ranjit Singh was taken into custody by the Delhi police for coming forward in defense of protesting women farmers when a mob of BJP goons launched an attack on them. According to the eyewitnesses, Delhi police cops were providing cover to these BJP goons for attacking farmers at the Singhu border.

The Delhi police cops had ruthlessly thrashed Ranjit Singh publically and later he was charged with an attempt to murder and several other charges of IPC.

Scores of youth farmers, who have been released recently, had also disclosed that Ranjit Singh was brutally tortured by the cops in remand due to which he had turned unconscious.