The Delhi Sikh Gurdwara Management Committee has got released eight more farmers arrested by the Delhi police. All these eight farmers had been languishing in the Tihar jail after being arrested on January 26 and framed under two different FIRs No. 31 and 22 registered in Mukherjee Nagar police station and Paschim Vihar police station, respectively. 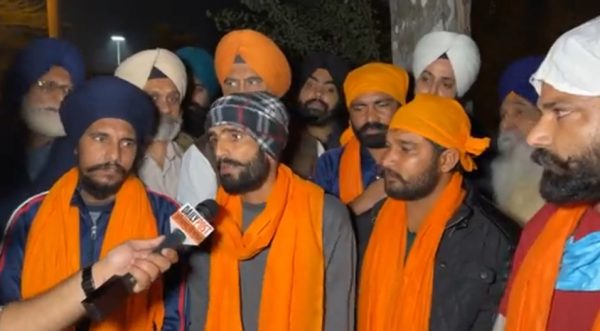 Interacting with media and these released farmers, DSGMC president Manjinder Singh Sirsa informed that the bails of these farmers were already approved, and all of them were released from the Tihar jail last night.

He further informed that most of these farmers were arrested by the Delhi police when they had gone to a local police station searching for their missing friends after January 26’s incident. “Instead of releasing their friends, the Delhi police also arrested these farmers, and the SHOs of different police stations shared them according to their need of fulfilling arrests in fake cases,” he added.

Manjinder Singh Sirsa also brought forward the lawyers who fought the legal battle for these released prisoners before the media. He thanked all these lawyers for their honest and courageous attitude towards justice while specially mentioning the names of Advocate RS Cheema, Advocate Sanjeev Nasiar and Advocate Ramesh Gupta.

The team of lawyers fighting the legal battle for the release of these arrested farmers revealed that all their bail pleas are going successful. “To date, 46 arrested farmers have been granted bail, and 31 out of these 46 have been released,” they added.

All the released farmers thanked DSGMC president Manjinder Singh Sirsa for his tireless efforts to convey essential items to them in jail and get them released through proper legal proceedings.

“After arresting us, the Delhi police cops used intolerable swearing language while dubbing us as Khalistanis and also posed non-sense questions like how much money was paid to us for coming to Delhi,” they revealed.

The detailed particulars of these released farmers are as follow:

Six more farmers get bail in case of Jan 26 incidents, thanks to DSGMC’s efforts