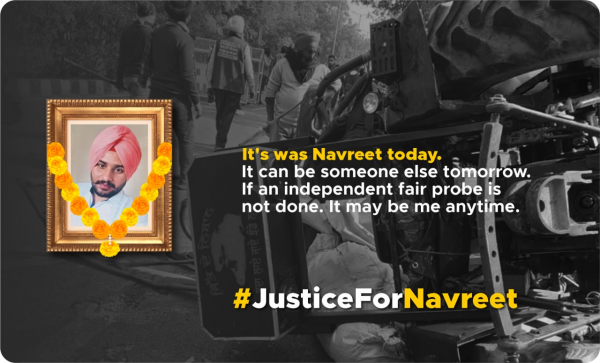 On January 26, thousands of farmers marched towards central Delhi along with their tractors. Farmers faced a barbaric backlash from the Delhi police as peaceful protesters endured baton-charging, tear gas shells, and stones at various locations.

On the way to the ITO area in central Delhi, again, this ‘confrontation’ was pursued where a 25-year old Sikh farmer Navreet Singh from Uttar Pradesh was shot dead by the Delhi police. His family members and two eyewitnesses have alleged that Navreet Singh was shot dead.

“Police officials fired at him, and within seconds his tractor toppled,” said one of the eyewitnesses, Balwinder Singh.

“He was driving his tractor down Deen Dayal Upadhaya Marg when the police shot at him,” said both witnesses Harmanjit Singh and Balwinder Singh.

Navreet’s grandfather, Hardeep Singh Dibdiba, who examined his grandson’s dead body before cremation, has alleged that the postmortem report was not accurate as it did not mention bullet wounds as the cause of death.

The postmortem report, prepared by a panel of three doctors at UP’s district Rampur, concludes that the cause of death is “shock and hemorrhage as a result of antemortem head injury.” But a forensic expert with 13 years of postmortem experience has said that the only possible explanation of the recorded wounds by doctors is that two bullets shot him.

The first two antemortem injuries recorded in the report include a lacerated wound of “size 2 x 1 cm, bone-deep, over medial end of the [right] eyebrow” and another lacerated wound of 2 x 1 cm over the left side of the chin, below the left angle of mouth.” For the first wound, the “margins are inverted” and for the second, the “margins are inverted and bone-deep,” the report states.

Referring to the first injury recorded in the report, the expert said that “margins are inverted when the force is from outside to inside,” so it “could also be the firearm entry wound.”

According to the expert, the second injury could also be a bullet wound. “The thing that corresponds is that both the injuries are of the same size, 2 x 1 cm, both have inverted margins, both are bone-deep,” the forensic expert explained. “So, this could probably be by the same weapon.”

For other conceivable explanations for these injuries, he said, “See, if somebody is hit on the floor or road, or tractor, or trolley, or tire, or anything, it will not be the same. It will not have that beautifully explained inverted margins. It would have been a wide wound,” he added.

Dr. Basil Purdue, a forensic pathologist, registered with the British government, told The Guardian, “To me, this is one gunshot wound, possibly two unless proved otherwise.” Purdue’s opinion was that it was “extremely implausible” for Navreet’s death to have resulted from a tractor overturning, the paper said. “You cannot get these injuries from a fall.”

Dibdiba also said that the doctors who conducted the postmortem admitted that a bullet caused the injuries, but they couldn’t mention this in the report.

Had someone pressurized the doctors?

After the death, Delhi police disappeared from the site, i.e., the rear gate of Andhra education society. For more than 3 hours, Navreet’s death spot was left uncovered. Some present officers were highly uninterested in the accident site, and even they were making lame accuses.

Why did the police not perform their duty in the first 3-4 hours of death?

Suddenly, an unauthentic video started circulating all over social media showing the “overturning of a tractor.” Before any official statement by police, mainstream media already claimed “tractor overturning” to cause death.

Who suddenly circulated that short clip?

How did the mainstream media claim the cause of death? Did ‘someone’ order media to do so?

Two CCTV cameras were placed on the boundary next to the arch to the Andhra Education Society, which would have closely captured Navreet’s death. The protesters at the AES were determined to see that footage and wanted to confirm that it has not been destroyed yet.

Building’s guard accompanied them along with police to the basement where about half an hour, farmers could not see the footage, so a technician was called out, who was sadly unable to figure out the problem.

Suddenly, around twenty officials—all dressed in riot gear—entered the AES. They were led by HSP Singh, the additional commissioner of police for the Tilak Nagar division. The ACP waited outside the building while the other police officials went down to the basement room.

They went down to the basement and pushed the farmers out of the room, and even dragged one farmer from the collar. One policeman grabbed the hard disk containing the CCTV footage, placed it within his chest shield, and walked out.

The police officials refused to speak while declining to disclose their identities or which police station they were from.

Why didn’t they disclose their identity?

Where is CCTV footage?

After accounting these pieces of evidence, let’s ask our conscience:

What was it? Murder or Accident?