1. Farmer Galtan Baghpat passes away today at Ghazipur site. Another farmer also passed away taking the total count to 53.
2. Farmers start 2021 by cleaning all the morcha sites. Temperatures are now freezing cold until later in the day.
3. Nagar Kirtan took place today at Singhu Camp in memory of Shaheedi Saka of Sahibzade
4. Union leaders addressed the press in the evening & said that agitations will be intensified if demands are not met on 4th.
5. Tractor Rally to be taken out on 6th.
6. Farm Unions warned that govt shouldn’t take the protests lightly & shouldn’t think of it as another Shaheen Bagh.
7. 6 – 20 Jan will be Desh Jagao Andolan. People will be educated about farm bills.
8. Tomorrow 7 members committee of farmer unions will address a press conference at the Press Club of India.
9. BJP leader Tikshan Sood’s house had a trolley of cow waste placed in the gateway by Sikh youth. BJP leaders got angry with Sikh youth, but the Sikh youth held their ground. Sikh youth told the BJP to stop the hateful rhetoric he put on airwaves against Punjab farmers.
10. Police arrested Dal Khalsa leader Ranveer Singh for cow dung being dumped at BJP leaders house. Still unclear if he is connected or it’s just harassment.
11. Amid ongoing anti-Modi protests across India by the farmers, an interesting incident came to the fore in Tarn Taran town when ex-BJP Minister Anil Joshi’s younger brother Raja Joshi raised anti-Modi slogans after being surrounded by the farmers. He also joined the day-long sit-in-strike by farmers in front of their fashion mall.
12. Bhai Manpreet Singh Kanpur during keertan divan at Gurdwara Shees Ganj Sahib ji, encourages Sangat to go to the morcha and be part of history.
13. USA Punjabi magazine Amritsar Times has released a special issue dedicated to the farmer’s struggle titled ‘Morcha’. It was dedicated to the sangat today from the morcha.
14. A family arrives from Holland to join farmers in Delhi.
15. Punjab BSP join farmers’ protest at Singhu border. State BSP president Jasbir Singh Garhi says the idea of participation is more social than political & they want to strengthen the social fabric in Punjab.
16. Yogendra Yadav criticized Gujarat and UP govt’s acts of trying to stop farmer leaders from participating in the protests.
17. Bike rallies were held in five villages of Rohtak in support of the farmers’ movement and showed their solidarity with the demands of the farmers.
18. In a dubious move, Akali dal has requested the deployment of Paramilitary in Punjab for the upcoming Nigam Parishad elections. Two days ago BJP had demanded the same after meeting Governor. Why in a democracy do they want paramilitary in civilian areas and elections? Why is the Badal team doing BJP bidding unless they are back together?
19. Protests outside Indian Consulate General of San Francisco, in favor of Kirsan Morcha and in opposition to Modi govt. With kirtan and Sangat seeing out the New Year while protesting.
20. ASSOCHAM, The Associated Chambers of Commerce of India; Oldest, Leading, largest and Apex Chamber has written to Punjab govt about Industry losses due to protests
21. Union minister publicly threatening farmer leaders after 30 Dec talks #PiyushGoyal : “We have LIST of 40 people of your organization. Do not open your mouth too much.” 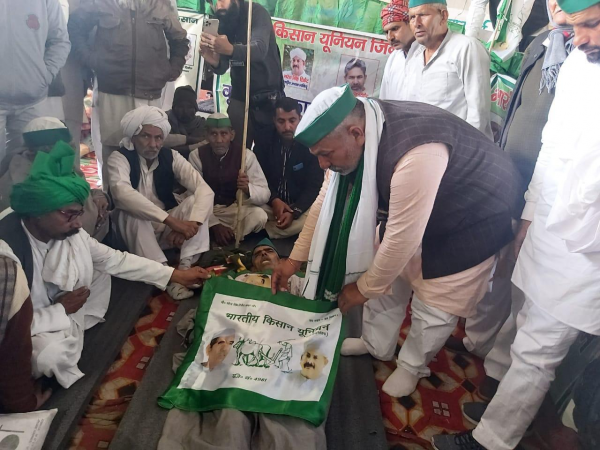