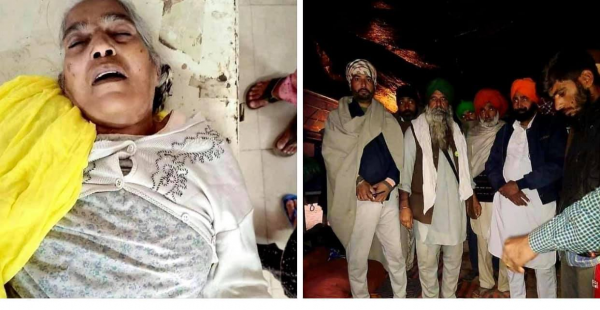 1. Today at elder Mata Gurmel Kaur passes away at the protest. Bhai Seva Singh passed away aswell. Both were front line.
2. National Bharat Band. Various highways closed for 4 hours.
3. Police attack peaceful protesters in Chandigarh. Water canons and brutal behaviour from police. No care for women or elders. Many protestors injured.
4. Opposition parties come out in favour of farmers.
5. Govt trying to use divide measures in talks. Govt messed around farmers today and had separate meetings in different places, cancelling meetings at short notice so that all farmer reps wouldn’t attend certain meetings.. trying to divide them against each other. Amit Shah came today and still asking for amendments. After meeting the govt didn’t allow farmers to talk to press, and drove them away. Famers have a internal meeting tomorrow to decide next course of action.
6. Dr Sukhpreet Singh Udhoke said Govt attitude is strict. However our unity will prevail.
7. Amazing atmosphere at the camp with morning prayers being done by Sikhs, Hindus and muslims.
8. Kirtan happening at many of the protest sites.
9. Abyassi Gursikhs of the Panth call everyone to do more abyass for protestors on front line.
10. Online interference continues as Bharat band have to keep changing their hastags. Social media giants continue censorship.
11. 3 United States Congressman write to Indian govt with concerns about treatment of protestors.
12. Arvind Kejriwal speaks in favour of farmers. He confirms BJP wanted to put farmers in temporary prisons in the delhi stadiums. He refused permission.
13. After visiting the farmer site, it was alleged the Chief Minister of Delhi was put under house arrest. Delhi police said he is not under house arrest, just providing him more security. Observers say it seems very convenient for BJP B team.
14. Sympathy for farmers issue growing in India despite all attempts of Republic TV and Zee News in their bias coverage.
15. Takht Sachkhand Sri Hazur Sahib Abchalnagar Sahib, Nanded, Maharashtra announcing the departure of a Jatha sent to support the farmers protesting in Delhi
16. Protests start in Bengal in favour of the protest.
17. Rajistan farmers walk to delhi to join protest.
18. In a pathetic stunt yesterday for media, Tomar the agriculture minister get 20 farmers from Haryana to say they support the laws. He parades them in the media. Observers say there are hundreds of thousands of farmers in Haryana, so why they only found 20?
19. The photographer that captured the now famous picture of the policeman hitting the elder farmer. He was physically assaulted today to right wing Hindus. The car of the attacker had Bharat Sarkar on it. Police refused to register the case of the assault, despite him noting the car registration.
20. Some farmers stating they are having to pay 25000 rupees to get wifi. They already had no income for months.
21. Later signs appear at morcha site saying free wifi from your Abisekh. It’s an attempt to get past the jammers set up by Modi Govt.
22. Anonymous post against Modi treatment of farmers. Unclear if genuine account. However Farmer supporters urge those who can contact Anonymous to get involved.
23. Jagmeet Singh, leader of Canada’s NDP makes another video in favour of farmers.
24. Famous YouTube influencer Lilly Singh shares Saving Punjab #MyPind survey.
25. Secretary General, World Sikh Parliament, Manpreet Singh speaks on South Asia News Indus TV articulately in favour of farmers.
26. BBC gives minor coverage to the protests.
27. Physical handicap Association express full support to the morcha.
28. Daily Mail have agreed to correct their article about Farmer Car Rally after social media campaign by sikhs.
29. Car rally organised in Mumbai starting from main Gurdwara.
30. Mayor of Shepparton, Australia comes out in favour of farmers.
31. Zee TV anchor Sudhir Chaudhry continues his hate reporting, now targeting Justin Trudeau and the London protests.
32. Defund the Hate campaign against hate anchor Arnab Goswami on Republic TV creating a list of sponsors of the channel. It’s asks supporters to contact Samsung to stop running adverts on Republic TV. Night after night he calls the farmers terrorists.
33. WSO canada arrange a Delhi Chalo night of the spoken word. Please register on their site.
34. Some Indian police on videos complaining about not being paid and not happy doing duty against farmers.
35. In a video from 3 months ago, Modi says they have been working on these laws for 7 years. It’s odd during that 7 years of working in agriculture laws, they did not consult the farmers.
36. BJP chief ministers from Haryana and …. openly say they will buy the crops from farmers in their state but not from other states in direct defiance of Modi’s Laws.
37. Complaints are being sent to BBC about its lack of coverage on the world biggest protest.
38. Series of Youth seminars arranged at Panthpunjab.org.
39. Dr varinderpal singh, who created Atam Pargas Punjsbi learning system. He is Principal soil chemist PAU ludhiana and refrains from taking golden jubilee award for excellence and gold medal award from chemical and fertilizer minister , while registering his protest to support farmers. Video on net.
40. Kaurs legal groups are helping the Sikh assaulted in London by a police officer. They are making a formal complaint.
41. BJP IT cell attack Diljit Dosanjh, his management team and Dharam Seva Records online.
42. Lastly, critical time approaching, everyone do Ardas for the safety of all those on front line. Vaheguru Mehar Karan. Below picture of Mata Gurmel Kaur and Bhai Seva Singh.