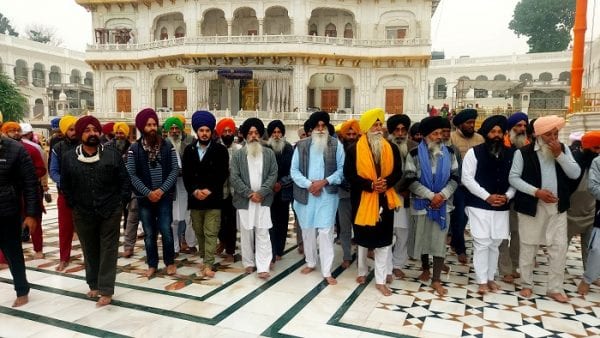 Before embarking on the long journey, they performed ardas at Akal Takht to seek the blessings of the Almighty Lord. The march was led by Kissan leader Baldev Singh Sirsa, who is a member of the 30 organizations spearheading the farmers’ agitation against black laws.

Talking to the media persons, Cheema said the Centre perceives Punjab as its enemy as the state is dominated by the Sikh population. “Farming is the backbone of the state and farmers are dear to us”, he added.

He further said the people of Punjab were prepared for a long fight in case the Union government doesn’t concede to farmers’ rightful demand and repeal all three bad laws.

He condemned the decision to seal the Punjab-Haryana and Haryana-Delhi borders to bar the entry of farmers to Delhi. “The decision is illegal, fascist and undemocratic in nature”, said Cheema.

Party spokesman Kanwar Pal Singh termed the Modi government as anti-farmer and pro-crony capitalism. He said the government’s repressive measures in stopping the march on Punjab border won’t deter their resolve rather it would strengthen the just cause.

On Centre’s invitation to farmers for the second round of talks, Baldev Singh Sirsa said it’s just an eye-wash to hoodwink the civil society as the centre is neither serious nor sincere to resolve the stir.

A large number of farmers and youth associated with Dal Khalsa’s youth groups namely SYP and SYFB raised slogans against Modi’s autocratic and dictatorial behaviour before proceeding towards Delhi on vehicles.