CHANDIGARH, Punjab—Observing 15th August as a black day for minorities, representatives of various Sikh, Kashmiri, and Dalit organizations carried out protests marches. Dal Khalsa, SAD (Amritsar), and United Akali Dal urged the parliamentarians to repeal UAPA and archaic sedition law like they revoked TADA and POTA in the past. 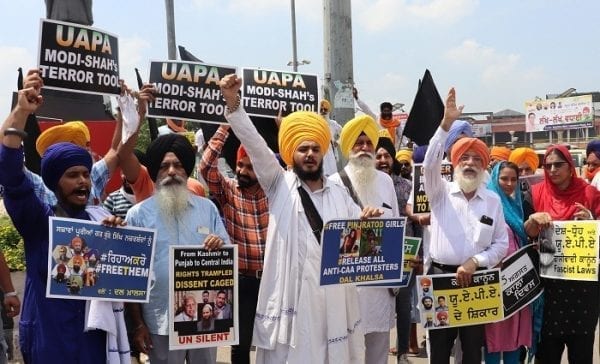 Denouncing the Indian state for crushing the rights of Sikhs, Kashmiris, and other oppressed people, Panthik bodies staged a protest at all the district headquarters of Punjab against the misuse of UAPA, denial of rights including the right to self-determination and anti-farmer agri ordinances. They rue that the draconian laws were being misused to kill the dissent and silence the dissenters especially in the peripheral states of India.

The organizations urged the Indian state and the world community to acknowledge the right to self-determination of people of Punjab in accordance with international treaties and covenants. 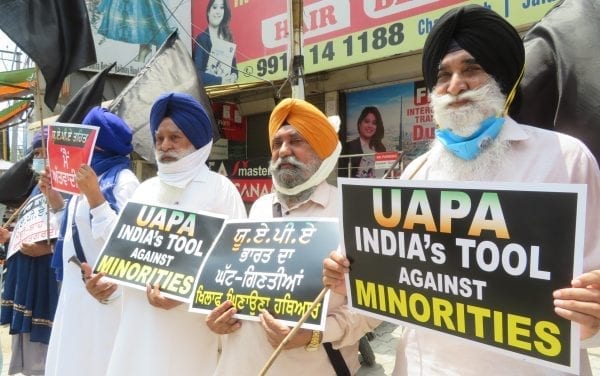 At Amritsar, Dal Khalsa spokesman Kanwar Pal Singh while addressing the gathering said the genesis of the Punjab problem was rooted in the betrayal of commitments and promises made by Indian leaders during the partition.  While Pakistan and India were celebrating their 73rd Independence Day with great fervour, we regret that “Sikhs had missed the bus”. Since then, the Sikhs have been striving to become the masters of their own destiny. He termed the UAPA as a terror tool of Modi and Shah to suppress the voices that refused to follow the dictates of Hindutva government led by them. Members of Akal Federation led by Naraien Singh and SYFB led by Ranjit Singh Damdami Taksal also participated in the protest.

Justifying their protest on India’s National day, Panjoli clarified that in principle they were not against rejoicing Independence Day of any country. However, it is ironic that a country like India has mis(used) every democratic institution to deny the glow of freedom to Sikhs and other minorities.

In all districts, the protest went off peacefully. However, at Jalandhar the police forced the protesters to halt their protest halfway on flimsy grounds. The protesters, who were led by SAD (A) district president Sukhjit Singh Daroli, Bahujan Kranti Morcha leader Rajinder Rana and Sikh Youth of Punjab president Paramjit Singh Mand refused, on which they were detained and taken to the police station along with scores of other protesters and later on released in the evening. The police registered a case under section 188 IPC, the Disaster Management Act 2005, and Epidemic Diseases Act 1897 against the organizers of the protest at PS Division 4.

Gurdeep Singh Bhatinda of UAD and Satnam Singh Paonta of Dal Khalsa slammed Modi Govt for branding nine Sikhs as terrorists under UAPA to malign the image of Sikh community. The protesters led by Prof Mohinderpal Singh, general secretary of SAD (Amritsar) at Patiala were carrying placards on which it was written: Under UAPA, I am a terrorist”. He said, “It has been 73 long years since India got freedom, but nothing has changed. The litany of grouses, grievances, and grudges of Sikh people against India has grown with every passing year, in fact with every passing day.

At Hoshiarpur the protesters took a swipe at the government on Agri ordinances terming it Modi’s fraud on farmers. Similar protests were held at Taran Taran, Moga, Bhatinda, Ludhiana, Patiala, Barnala, Sangrur, Ferozepur, Ropar, Faridkot, and many other cities.