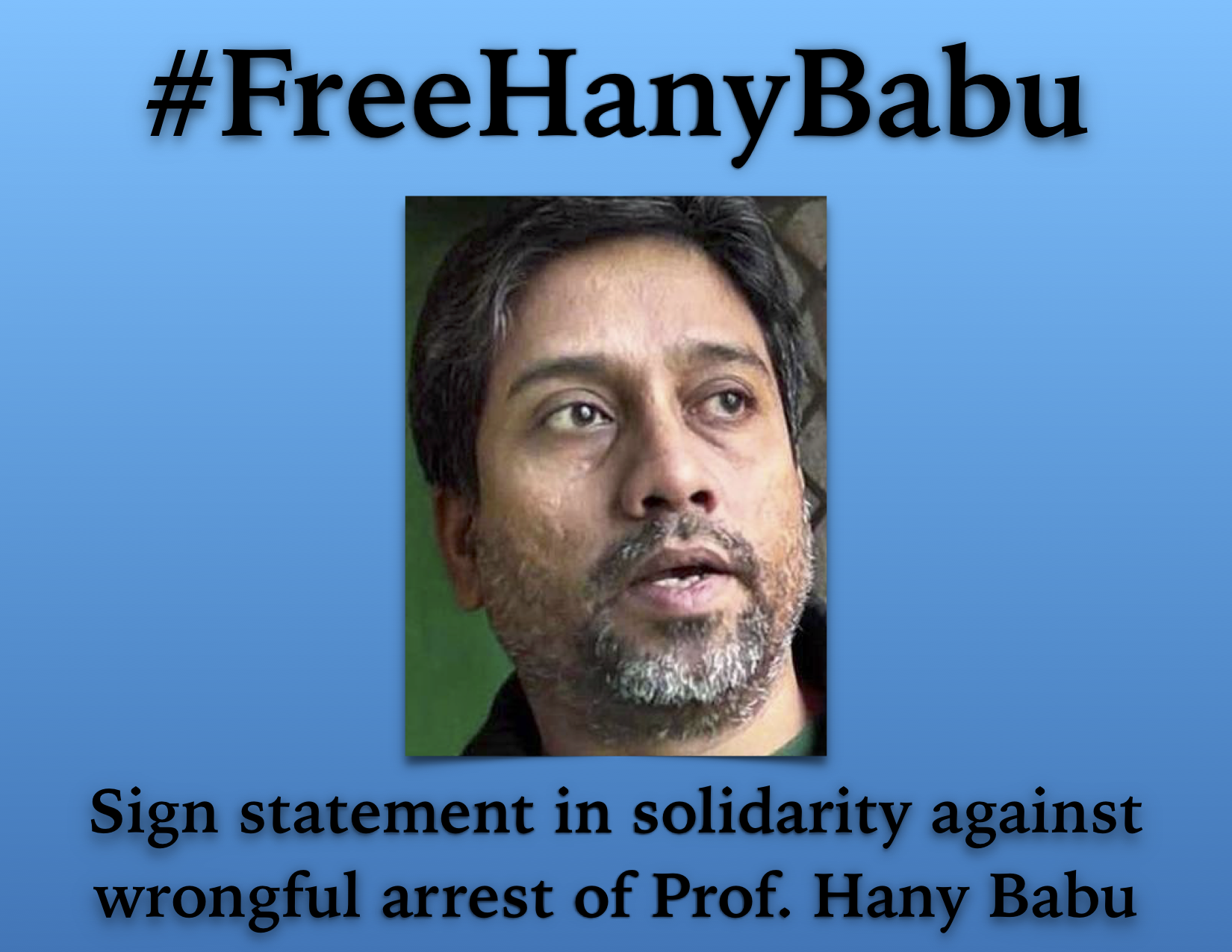 In response to the arrest of Indian professor Hany Babu, the Anti-Caste Alliance (ACA) issued the following statement. Your signature is requested.

On 28 July 2020, The National Investigation Agency (NIA) arrested Dr. Hany Babu, Associate Professor at the Department of English in the University of Delhi, in connection with the Elgaar Parishad-Bhima Koregaon Case. On 24 July, Prof. Babu (54) was summoned to the NIA office in Mumbai as a witness where he was subsequently arrested after five days of questioning. He had requested to provide testimony via Video Conferencing considering the travel risk related to COVID-19, but his request was denied. As the questioning started, Prof. Babu was forced to provide false testimony against other activists and to accept allegations of being a functionary of the Maoists. Even under immense pressure, Prof. Babu, a conscientious teacher and activist, refused to concur with these lies. Because he stood for truth, Prof. Babu was arrested after five days of harassment in the name of interrogation.

The arrest of Prof. Babu is the continuation of an almost year-long harassment which began with a raid of his house on 10 September 2019. The Pune Police, who claimed the raid was in connection with the Bhima-Koregaon case, confiscated his laptop and mobile phones as well as barred him from using his social media handles. Prof. Babu has clearly stated that he has no connection in any way whatsoever with the incidents at Bhima-Koregaon. The Bhima-Koregaon case is related to the eruption of violence at the annual celebratory event of Dalits on 1 January 2018. Although violence at the event was triggered by the interference of Hindu right-wing groups, the incident was used as a pretext to arrest Dalit scholars and other activists. Prof. Babu is the twelfth person to be arrested in relation to the case.

As anti-caste scholars and activists, we understand that the framing of Prof. Hany Babu, a tireless anti-caste intellectual and activist, is an attempt to penalise Dalitbahujans for raising their voice against casteist practices. It is a tragic irony that the Indian Government is using a celebratory event of Dalits to frame anti-caste scholars and activists. Prof. Babu, who has consistently worked to ensure equal opportunity for Dalitbahujan students, views social justice as one of the main aims of scholarship. He also raised his voice to defend the rights of Prof. Sai Baba, a Delhi University Professor with 90% physical disability who was arrested on charges of having Maoist links in 2014. Prof. Babu’s commitment to social justice is penalised by his arrest. This is the latest example of the current Indian Government’s attempt to annihilate dissent and freedom of life for its vocal public. We are also disturbed by the arrest of India’s important intellectuals and activists during the time of the global pandemic. This situation causes great concern for Prof. Babu’s good health and safety in custody. It is with utmost dismay that we witness this onslaught on India’s public intellectuals who are committed to social justice like Prof. Hany Babu. We, the national and international community of anti-caste scholars and activists, urge the Indian Government to acquit Dr. Hany Babu, in the interest of preserving democratic values and human rights.

Project OORAA has launched an app for kids to learn Gurmukhi Lipi and Punjabi language through interactive visualizations and content. The app is released...
Read more

The book "The Valiant: Jaswant Singh Khalra" in England and Punjab is now available for pre-order. This richly-illustrated book takes young readers on an...
Read more