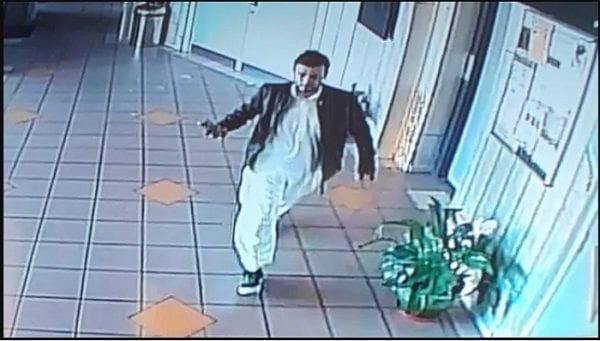 “Sikhs across the world were appalled at the grotesque act of violence on Monday in Derby during which an intruder smashed through the entrance to Guru Arjan Dev Gurdwara on Stanhope Road and left a note at the premises suggesting the attack was somehow a reprisal for India’s human rights abuses in Kashmir,” reads a press release of World Sikh Parliament.

“Thankfully nobody was injured – but it could very easily have been otherwise. Not only was this an outrageous attack on a place of worship, it was a dangerous incident that could have led to serious consequences in terms of a broader conflict between communities in the UK and elsewhere. By any measure, the attack was a shameful act, deserving of unreserved condemnation by all. It has been condemned, by reputable community leaders, Members of Parliament and others,” it further adds.

Seeking an in-depth investigation into incident, the WSP says that it was determined to get to the truth and expose and hold to account anyone involved in this outrageous incident. “Whether it was the deranged act of an individual with mental health issues, as has been speculated in some quarters, or whether it was a deliberate hate crime intended to incite inter-community tension and conflict, time will tell,” it adds.

“We understand that the attacker, who was arrested shortly afterwards, has been charged with related offences but the full details of the police action are not yet public. In any event, we call for the strictest action against him by the UK’s law enforcement agencies, so that a clear message is sent out that such behavior will not be tolerated,” says the World Sikh Parliament.

“Perhaps just as important though is the response of the communities concerned. In a meeting held on the same day between delegates of World Sikh Parliament and the management committee of the Derby Jamia Mosque, the committee strongly condemned the attack and encouraged anyone with information to assist the police in its investigations. There has, in addition, been a steady stream of robust messages from Kashmiri organisations across the UK and in Kashmir itself, which have castigated the attack and spoken of the need to build on the excellent working relationship between responsible members of both communities which has been built over several years,” it further said.

Those messages recognize that the Sikhs have in fact been amongst the strongest voices supporting the Kashmiris over recent months during which the Indian state has undoubtedly carried out atrocities in Kashmir. A fact that the attacker clearly failed to register before undertaking this criminal, foolish endeavor.

Ranjit Singh Sarai, Coordinator, Self Determination Council added, “Sikhs neither attack nor tolerate attacks on places of worship, of whatever religion, in which ever country. We demand that anyone involved in this attack should be punished in accordance with the law so that justice is seen to be done.”

Bhupinder Singh, Member, Religious Council, “The attack is an obnoxious act of terror and the perpetrators should be penalized in accordance. ” We ask our community here in the UK to remain vigilant and act in a considered manner in dealing with any such attacks. Those that are responsible must be held accountable for their actions, but it is also crucial that we do not let those with sinister designs to cause community-wide conflict to succeed, especially when the responsible leadership has taken prompt steps to condemn the perpetrator and pledged to work constructively with us in building mutual trust and friendship.