CHANDIGARH, Punjab—In 2015, the United Nations’ member nations adopted 17 Sustainable Development Goals (SDGs) as a universal call to end poverty and protect the planet. The deadline to achieve these goals is 2030. Of 17 goals, the second one — ‘zero hunger’ — aims to end extreme hunger and malnutrition, especially among children, by 2030. The Indian Express explains how Guru Nanak’s ‘langar’ is contributing to achieving this goal and reducing malnutrition in African countries, bringing down ‘preventable children deaths’. 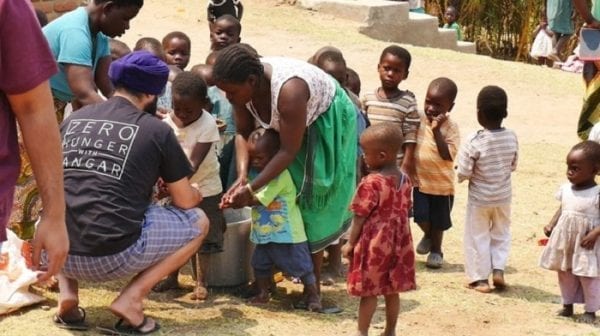 Langar refers to a system of developing a community kitchen, where people irrespective of their caste, religion and social status sit together on the floor and have food. The institution of langar finds its roots in two teachings of Sikhism — ‘Kirat karo, naam japo, vand chako’ (work, pray, and share with others whatever you earn) and ‘Sangat aur pangat’ (eat sitting together in rows on the floor). According to Paramvir Singh, professor, department of encyclopedia of Sikhism, Punjabi University, Patiala, the word ‘langar’ has its origin in Persian, and means a public eating place where people, especially the needy, are given food.

What is the link between Guru Nanak and langar?

It is said that when Guru Nanak was a boy, his father gave him Rs 20 and sent him to buy goods, sell them and return with some profit. However, on the way, he met some hungry sadhus (holy men). He used the Rs 20 to arrange food for them. He made them sit on the floor and served the food with his own hands. When Nanak returned home, his father was furious as he had returned empty-handed. But Nanak said that he did a ‘Sacha Sauda’ by feeding hungry men, which he said was ‘the most profitable deal’ for him. Currently, Gurdwara Sacha Sauda stands at Farooqabad in Sheikhupura district of Pakistan, which is where Guru Nanak is believed to have fed those sadhus.

Later in his life, Guru Nanak strengthened the practise of langar at Kartarpur, his final resting place, where he had established a dharamsala for prayers and everyone was served food without any discrimination.

How have other Sikh gurus contributed to this tradition?

The second Sikh guru Angad Dev and his wife Mata Khivi played a crucial role in strengthening the tradition of langar. Professor Paramvir Singh said Mata Khivi used to work in a kitchen, serve langar to sangat and her contribution also finds mention in the Guru Granth Sahib.

The third Sikh Guru, Amar Das, too devoutly followed ‘sangat aur pangat’ and anyone who used to come to meet him, was first served langar. It is said that even when Emperor Akbar came to meet him, Guru suggested he should first have langar sitting with everyone on the floor, which Akbar accepted.

What is the UN’s ‘Zero Hunger’ goal all about?

The goal of ‘zero hunger’, specified under 17 Sustainable Development Goals (SDGs) of the UN, says, “…Extreme hunger and malnutrition remain a huge barrier to development in many countries. There are 821 million people estimated to be chronically undernourished as of 2017, often as a direct consequence of environmental degradation, drought and biodiversity loss. Over 90 million children under 5 (years) are dangerously underweight. Undernourishment and severe food insecurity appear to be increasing in almost all regions of Africa, as well as in South America.” It further says, “In 2017, Asia accounted for nearly two-thirds, 63 per cent of world’s hungry and nearly 151 million children under 5, 22 per cent, were stunted in 2017 across the world.”

What is the aim?

The target, as per the UN website, is, “By 2030, end hunger and ensure access by all people, in particular the poor and people in vulnerable situations, including infants, to safe, nutritious and sufficient food all year round. By 2030, end all forms of malnutrition, including achieving, by 2025, internationally agreed targets on stunting and wasting in children under 5 years of age, and address nutritional needs of adolescent girls, pregnant and lactating women and older persons.”

How are Sikh organisations using langar to reduce hunger?

Several Sikh organisations like Khalsa Aid, Langar Aid, Midland Langar Seva Society and others are now branching out to other countries where langar is used to provide nutritious meals to the undernourished. One such organisation is ‘Zero Hunger With Langar’ which is specifically working in two African countries — Malawi and Kenya — which are among the countries with the highest malnutrition rates among children and feature in the UN’s target list.

What does ‘Zero Hunger with Langar’ do?

Founded in 2016, ‘Zero Hunger With Langar’, working under its parent body ‘Guru Nanak Nishkam Sewak Jatha’ based in the UK, is currently serving over 1.50 lakh meals a month to malnourished children in Malawi and nearly 8 lakh meals a month in Kenya. Jagjit Singh, who founded the project in 2016, says, “We aim to fight world hunger with langar. We started this project after UN announced ‘zero hunger’ as its goal. In Kenya, we are cultivating 300 acres of land and aim to serve 10 million meals a year. Malawi is among the countries with the highest levels of malnutrition in the world hence we started serving there first. We are targeting children in primary schools, nurseries because there children are exploited for something as basic as food. They are made to work in return for food. Now we are serving highly nutritious porridge meals with maize, soya etc. rich in carbohydrates and other vitamins, minerals to them. Since 2016, we have served more than 3 million meals in Malawi. Poor families here were just mixing water in maize flour and drinking it to fill their stomachs.”

What has been the impact of the ‘Zero Hunger with Langar’ movement in Malawi? How severe is the problem here according to UNICEF?

Jagjit Singh says, “Attendance in primary schools and nurseries has improved considerably. We are more than 90 per cent malnutrition-free across our centers where we serve in Malawi.”

In India, which are the largest kitchens serving langar?